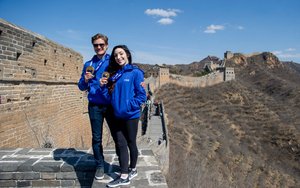 An agreement between Visa and China’s tourism department is expected to generate at least two marketing campaigns during 2016, aka U.S.-China Tourism Year.

One campaign will have U.S. financial institutions promoting “Beautiful China” through cardholder and travel programs. Another, a consumer-facing effort, will take place on social media and feature the work of Chinese photographers, inspiring Americans to #SeeChinaFromTheInside.

The agreement between the China National Tourism Administration, the U.S. Department of Commerce and Visa will provide for a year-long series of events designed to enhance tourism, trade cooperation, and cultural understanding between the two countries.

Visa celebrated the news at an event at the Great Wall of China last week, where nearly 1,000 U.S. visitors were invited to climb the Jinshanling section of the Great Wall alongside decorated U.S. Olympians and Team Visa athletes Meryl Davis and Charlie White (pictured). Two-time World champions, Davis and White were the first Americans to win the gold medal for ice dancing, which they won at the Sochi 2014 Olympic Winter Games.

Throughout the year, Visa will be working with Brand USA, a public private partnership that promotes the United States as a premiere travel destination, helping to bolster two-way tourism between China and the U.S.