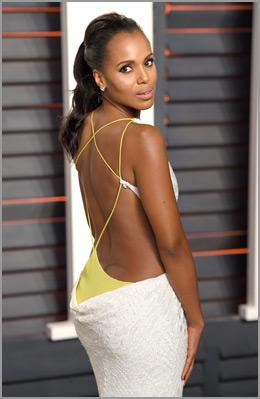 When it comes to what makes America’s hearts beat faster, Victoria’s Secret regards itself as a cultural expert. In its new 2016 “What is Sexy” ranking, it has named actress Kerry Washington, songstress Demi Lovato and style risk-taker Kylie Jenner as the very sexiest.

The list is based on Twitter votes from VS’ fans, and includes plenty of unexpected picks, too. Nashville is named the sexiest U.S. city, for example, while Paris is international destination. British singer Ellie Goulding has the sexiest lips, actress Sofia Vergara is the sexiest mogul, and “Quantico” has the sexiest TV cast. Singer/actress Jennifer Lopez, meanwhile, is so hot that she rated a category all her own: Forever sexy.

The poll and subsequent social media push is all part of the push for Very Sexy Now, a new fragrance, as well as the revamped Very Sexy Now bra line, which it describes as “fiercer and flashier.”

The effort comes amid a season of substantial successes for the lingerie retailer, owned by L Brands. It broke some of its own records in its most recent results, with the Columbus, Ohio-based company reporting that net sales for the fourth quarter rose 8% $4.39 billion, while comparable-store sales advanced by 6%. And in February, it reported net sales of $849.3 million, a 5% increase. The company is once again under the direction of founder Leslie Wexner, who took control after CEO Sharen Turney left the company last month, after 16 years.

Morningstar recently increased its fair-value estimate of the company, reiterating its conviction that the company can sustain its 6% annual sales growth rate, even as other retail brands are sucking wind. Its estimate “is in line with those of highly profitable fast-fashion competitors H&M and Inditex,” it wrote recently, in part because it has so few competitors in both the lingerie and beauty arenas, with its Bath & Body Works chain. “Although hefty goals, we think they are achievable given the defensibility of the lingerie and beauty space.”