Campbell Says Its Packages Will Be BPA-Free By Mid-2017 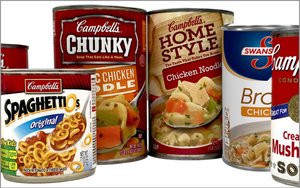 As part of its transformation in response to consumer preferences and health concerns, the Campbell Soup Company announced a specific date for fulfilling its 2012 promise to eliminate Bisphenol A (BPA) linings from its cans.

Campbell — which said it has tested “hundreds” of alternatives since it first announced its intention to eliminate BPA linings in response to consumer feedback — now says it has begun that transition, and will complete it by mid-2017.

The company said it began transitioning to BPA-free, acrylic- or polyester-based can linings this month, and will continue that transition across its U.S. and Canadian portfolio — including Campbell soups and gravies, Swanson broth and SpaghettiOs pasta — through next year.

Campbell said it’s on track to have 75% of its soup portfolio in the new cans by December 2016.

Campbell is also testing alternatives to BPA coatings used on other packaging, including aluminum cans used for V8 beverages and metal screw-top lids on glass jars, and also expects these packages to be BPA-free by mid 2017.

Finding new packaging solutions for the soups, gravies and pastas required identifying linings that would “ensure the safety of more than 600 different recipes, such as tomato-based products, which are naturally acidic and can react with some linings over time,” the company explained. Campbell said that it’s now confident that the acrylic and polyester options will ensure the first priority of food safety, and also preserve taste and affordability.

The company noted that it already offers many products in non-BPA packaging like cartons, pouches and PET bottles.

Campbell is pushing hard to get out in front of the competition when it comes to addressing consumer demand for simpler, “clean” ingredients and transparency.

This year, in January, Campbell bucked much of the food industry by announcing that it now supports mandatory federal labeling of products containing GMOs, and that it is beginning to label its own GMO-containing products in anticipation of Vermont’s GMO-labeling law, set to be effective July 1.

Since then, several other major food companies, including General Mills, Kellogg, Mars and ConAgra, have reluctantly announced that they are also starting the GMO labeling process in the face of the Vermont deadline.

Last year, Campbell also introduced www.whatsinmyfood.com, a site that offers detailed information about the processes behind its foods and packaging, including GMOs and BPA linings.

It’s also one of some 30 companies participating in the Grocery Manufacturers Association’s new SmartLabel program, which employs QR codes on packaging to take consumers to more product information online.

That program was at least in part originally developed as a hoped-for alternative to GMO and other expanded ingredients labeling on product packaging.