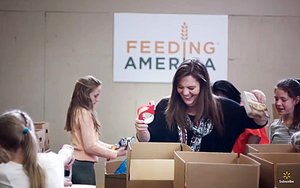 Walmart is sharpening its hunger game, and this year says it hopes to help serve up 75 million meals through its new “Fight Hunger. Spark Change.” campaign, including a custom emoji.

The Bentonville, Ark.-based retailer says the campaign is a partnership with Feeding America, a national network of food banks serving about 46 million people. It’s kicking off the campaign, which runs through late April, with a $1.5 million donation. And it hopes to raise an additional $1.5 million through its social-media effort.

Shoppers can use the #FightHunger hashtag on Twitter, Facebook and Instagram, or use unique Snapchat filters in some stores. (Twitter has cooked up a custom emoji for the effort, which appears after the hashtag.) Each mention generates a 90-cent donation from Walmart.

It’s also raising funds by partnering with food companies like PepsiCo, Campbell Soup and General Mills; when consumers make select purchases, those manufacturers will make a nine-cent donation. And shoppers will also have a chance to donate at registers.

Separately, General Mills announced its own initiative with Feeding America, naming country singer Jennifer Nettles as the campaign spokesperson for this year’s “Outnumber Hunger” effort. Now in its fifth year, the cause-marketing effort (which also includes record label Big Machine Label Group) uses a special code on more than 150 selected products. After purchase, consumers enter the package code and their own zip code, triggering a donation to their local food bank. Since it started five years ago, General Mills says the annual drive has funded 40 million meals.