Patty Duke And The Lost World Of 1960s Television 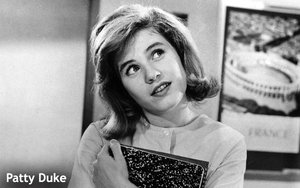 This morning, I attempted a Google search in an effort to unearth real-life stories about cousins who looked so much alike that their friends and relatives couldn’t tell them apart, but I found none.

And yet this was the premise for “The Patty Duke Show,” one of the best-loved TV shows of the 1960s. Patty Duke, who died Tuesday at age 69, was a child-acting phenomenon. She won an Oscar at age 16 for “The Miracle Worker” and was then offered her own prime-time TV show. It ran from 1963 to 1966 on ABC.

In “The Patty Duke Show,” she played two roles (made possible with various split-screen video tricks) -- Patty Lane, a typical American teen-ager, and Cathy Lane, her prim and proper cousin from Europe. It was a nice show that is well-remembered by many. It started running on TV again this past January on the vintage TV channel known as MeTV.

But it’s the show’s identical-cousin scenario that has always fascinated me. What on earth gave the network and the show’s creators, William Asher and Sidney Sheldon, so much confidence that the viewing public would buy this show about twin cousins when the very idea of two cousins being identical was impossible? Maybe it was the fact that, when it came to television in that era, audiences seemed to accept just about anything that was presented to them.

Whenever I contemplate the TV shows of the 1960s, I am usually struck by the sheer number of them that were based on ideas that were decidedly farfetched, if not far out.

One show had a group of earthlings marooned on a planet where everything was 12 times their size -- “Land of the Giants” (1968-70). In another space drama -- “Lost in Space” (1965-68), a family of astronauts were stranded on a series of planets where they encountered a never-ending series of fake, furry monsters leaping suddenly to attack them from behind Styrofoam boulders.

In one Space Age comedy -- “It’s About Time” (1966-67) -- two astronauts accidentally traveled back in time where they met a family of comical cave people (the cave man dad was Joe E. Ross from “Car 54, Where Are You?; the cave mom was Imogene Coca). “It’s About Time” was created by Sherwood Schwartz, creator of “Gilligan’s Island,” a ridiculous 1960s show if there ever was one.

There was a comedy about a talking car that nagged its owner (“My Mother the Car”) and another comedy about an outer-space alien (“My Favorite Martian”). Another comedy, “Hogan’s Heroes,” was about bumbling Nazis. It premiered in 1965, just 20 years after the end of World War II, when memories of the Nazi horrors were still fresh. My mother found this show to be so appalling that it became the only show I can remember that she would not let us watch.

Some of these scenarios outlived the ’60s to recur again. “Knight Rider” was about a talking car. “Small Wonder” was about a life-like robot, a small girl this time. Superheroes are numerous in prime time today. And space shows -- particularly “Star Trek” spinoffs and reboots – have been with us ever since.

But I have searched and searched and have found no recurrence of the identical-cousin scenario. There have been plenty of twin siblings – from Patty and Selma Bouvier on “The Simpsons” to Zack and Cody on “The Suite Life of Zack and Cody” on the Disney Channel.

But there have been no more identical cousins that I know of. Maybe that’s because Patty Duke was one in a million. Or, in this case, two in a million.

tv
1 comment about "Patty Duke And The Lost World Of 1960s Television".
Check to receive email when comments are posted.
Next story loading