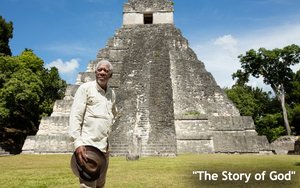 Oh, ye gods of TV, take me places I cannot go myself.

It is a prayer that is not always answered by the great majority of TV shows that we all watch, but to give television its due, it does succeed fairly often at this fundamental task -- live sports, political debates, breaking news events in far-flung locations and so many other examples.

This benefit of TV and all of its wondrous technology is so basic that it is even reflected in the story of St. Clare of Assisi (1194-1253), the patron saint of television. She was designated as TV’s patron saint in 1958 by Pope Pius XII based on a story about her in which the sights and sounds of a Catholic mass appeared miraculously on a wall in her bedroom when she was bedridden from illness and unable to attend the mass herself.

Starting this Sunday, TV’s miraculous ability to take us places we cannot (or at least probably won’t) go ourselves will be pressed into service for what is ultimately a religious purpose -- the search for God.

The tour guide for this globe-trotting expedition -- as much a search for the meaning of life as a quest to find God or otherwise understand the concept of God -- is Morgan Freeman, 78, who played God in two movies, “Bruce Almighty” and “Evan Almighty.”

Freeman’s six-part series is called “The Story of God,” and it premieres Sunday night (April 3) at 9 Eastern on National Geographic Channel. It is one of those documentary series that come along every once in a while to fulfill TV’s promise to take you places you won’t likely get around to visiting yourself.

This series also happens to fulfill the expectation one has for documentaries on the National Geographic Channel -- that they aspire to the quality, in words and imagery, that we have come to expect from National Geographic magazine for more than a century.

This series succeeds on all of these fronts. In the first episode provided for preview, Freeman travels the world -- from New York and Mexico to Egypt, Jerusalem and India, all in a single one-hour show -- to learn about diverse cultures and religions. He seeks to learn how they regard the concept of God, and for the sake of this premiere episode subtitled “Beyond Death,” how these divergent belief systems view the inevitability of death and the possibility of an afterlife.

In his travels, Freeman finds a variety of approaches. Touring pharaonic tombs in Egypt, he learns how the pharaohs viewed the afterlife. For example, he learns while touring the tomb of one of the Ramses that the constant repetition of the pharaoh’s name in the hieroglyphics on the tomb’s walls was designed to help the pharaoh achieve immortality; the more frequently people read or uttered his name, the more he would be remembered.

In the holy city of Varanasi in India, Freeman sits with an English-speaking Hindu physician and scholar who explains the concept of reincarnation. While they sit in a small porch overlooking a narrow roadway, processions of Indians toting the dead bodies of loved ones pass them frequently, apparently a common sight in this city on the Ganges River, where so many bodies are burned in ritualistic pyres set afloat in India’s holy waterway.

This sequence in the show represents one of those times where you just have to marvel at the wonder that is television. Another time is a sequence in New York City where Freeman came face-to-face for a conversation with a mechanical cyborg that was no more than a bust -- from the shoulders up -- of a woman that was nevertheless so lifelike that it gave me gooseflesh.

“I’m a human who happens to be a robot,” this eerie cyborg woman tells Freeman at one point, as he stares at this thing in amazement.

We then meet the two extraordinary innovators behind this invention as they explain how they are working toward finding ways to store “our memories in mind files” so that future generations can communicate with us long after we are dead -- a state they call “cyber-consciousness.”

The rest of this hour is just as eye-opening and thought-provoking as Freeman visits the site in Jerusalem that is believed to be Jesus’ grave and the site of his resurrection, and also journeys to an archaeological site in Mexico to learn why human sacrifices were so important to the Aztecs.

Future installments in Freeman’s “Story of God” series are titled “Apocalypse,” “Creation,” “Who is God?,” “Evil” and “Miracles.” This series belongs in the latter category.