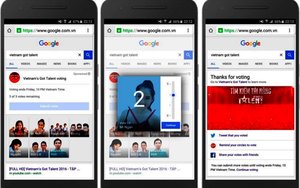 Google will give fans watching some of the biggest entertainment shows across Asia a way to cast their vote for their favorite entertainer through a partnership with FremantleMedia, working with PHD Singapore.

Now fans of the shows such as "The X Factor" and Asian versions of shows like "Got Talent" and "Idols" will have the ability to vote for their favorite contestant from Google's search page on their phone, tablet, or computer.

Fan vote via Google when the IDOL vote window opens at the top of the show, and every live performance during the show, by searching for Idol-related terms. The searches reveal a voting platform where fans cast their votes for their favorite performers.

In the U.S., after fans cast their vote they have opportunity to share it on Google+, follow contestants, join community conversations or participate in Google Hangouts about the show.

Through the partnership, a similar tool will roll out to 11 FremantleMedia talent shows in India, Indonesia, Vietnam, and Thailand.

"Vietnam's Got Talent" and "The X Factor Indonesia" have begun testing the technology earlier this year, but reportedly the media company will announce other shows as they roll out.

The second season of the Indonesian version of "The X Factor" received more than six million public votes through the partnership with Google.

The feature will reportedly work with existing voting tools, such as texting and casting votes through an app.

The news, likely timed to coincide with the Broadcast Asia 2016 conference held in Singapore this week, where Rushit Jhaveri, VP, FremantleMedia, will participate.