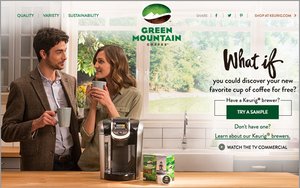 Keurig Green Mountain asks "What if" in its latest multichannel campaign, the first that includes addressable TV integrated with display, search, and social advertising, along with media outreach.

The eight-week integrated campaign celebrates the brand's 35th anniversary, highlighting the story behind one of the largest U.S. coffee roasters.

It tells how the Green Mountain brand continues to build relationships with individual consumers.

While search advertising and marketing have become "the foundation for every campaign we do," Mark Baynes, CMO at Keurig Green Mountain, told Media Daily News, "addressable TV gives the brand another means to target specific consumers in their home.

The campaign consists of several 15- and 30-second video commercials similar to television ads, but runs on addressable TV, targeting consumers who use the coffee, tea, or cold beverage brewer. Of the multimillion dollar campaign budget, between 30% and 40% went to addressable TV, he said.

"With help from our partner Mediavest, we're trying to target our customers with greater precision," he said.

The campaign tags browsers of those landing on the Web site to request a sample, tracking conversion rates of consumers who eventually end up on Keurig.com. An attribution model will analyze the impact of the campaign. Of those who click through to the Web site landing page, about 70%, sign-up and register on the site, Baynes said.

The multichannel campaign required a lot of help. While Havas created the TV and online ads, VML spearheaded Web site design and video production and Web platform for Green Mountain. Mediavest handled media buying and Interbrand delivered product packaging. Catapult spearhead the sampling strategy, and CCG followed through on executing the sample part of the campaign.

"The challenge today is a lot of companies have a broad agency network, because it's really about driving integration," he said. "Everyone has to play nice in the sandbox. It's about driving a collaborative network and that's how you get the best, effective campaigns."

Between 80% and 90% of the people looking for something online begins with search, Baynes said. "We'll buy terms around this campaign, whether organic or paid, because we're asking people to visit the site," he said. "It's always on, ever present in out digital program."