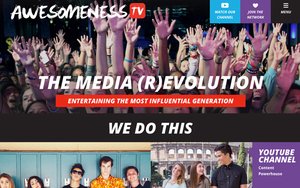 Verizon Communications has made a deal to become a new equity partner in AwesomenessTV, the popular YouTube original video multichannel network -- a pact that will also boost its new premium mobile video service.

Verizon has bought a 24.5% stake in the company -- making it an equal partner with Hearst, which will own exactly the same 24.5% stake.

DreamWorks Animation will remain the majority shareholder in the company with a 51% stake. The studio acquired the company in 2013 for $33 million and promised to pay $117 million more if performance goals were met.

Although terms of the deal were not disclosed, AwesomenessTV now says it has a valuation of $650 million.

The companies say the premium video will include “leading talent in front of and behind the camera.” AwesomenessTV has already produced shows for go90 -- ”Guidance” and “Top Five Live.”

With regard to the new service, Jeffrey Katzenberg, CEO of DreamWorks Animation, stated: “This agreement is clearly impactful for AwesomenessTV -- with annual revenues expected to more than double in the first 12 months of content delivery.”

Brian Robbins, founder/chief executive officer of AwesomenessTV, and Brett Bouttier, president of Awesomeness, will continue to lead the company.