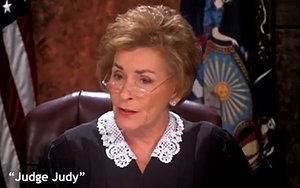 CBS Television Distribution’s “Judge Judy” has improved 6% over its season-to-date number to 10.3 million average viewers, according to Nielsen data from September 7, 2015 through March 27, 2016 versus the same time period a year ago.

“Judy” also remains the second-highest among all syndicated TV shows in terms of all viewers.

CBS also distributes “Wheel of Fortune,” which remains the No. 1 syndicated game show, down 3% to 10.9 million. Its sister game show “Jeopardy,” also distributed by CBS, is off 6% to 9.8 million.

Talk shows are a relatively closer race versus other categories -- but all are down this season.

CBS’ “Dr. Phil” is still earning the best results, giving back 4% on its season-to-date ratings to 4.29 million average viewers. Disney’s “Live with Kelly & Michael” is off by about the same percentage -- 3% -- to 3.97 million.

Analysts say the majority of sitcom ratings -- around 85% -- come from TV stations, with around 15% of ratings coming from cable network airings.