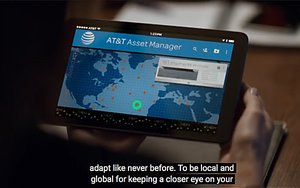 Technology has brought consumers and businesses a lot of options, and there’s no reason why they can’t avail themselves of them all.

In a new campaign targeted at enterprise (i.e., business) consumers, AT&T asserts that we no longer live in an “either/or” world, and that you can have it all. The new effort, “The Power of &,” breaks this week during The Masters golf tournament, of which AT&T has been a sponsor since 2005.

“Our customers are looking for ways to use technology to better sense and adapt to what’s going on in their worlds,” Alicia Dietsch, vice president of marketing communications and operations at AT&T, tells Marketing Daily. “For the longest time in business, it was about hard choices. By partnering with AT&T, we give customers the ability to choose both when faced with opposing forces.”

New television commercials from BBDO showcase this new direction using the “&” as a visual identifier to demonstrate that business customers no longer have to make limiting choices. An introductory spot shows business people in different settings, with ampersands appearing as a part of their business (like in the workings of machinery, as part of a freeway cloverleaf or in shipping containers).

“Businesses haven’t always been good at 'and,' held back by a world requiring them to decide between one choice or another,” says a voiceover. “But with the rate of change increasing, there’s no time for 'or.' Businesses today need the agility to do one thing and another.” The 60-second spot continues along those lines before concluding with the AT&T logo and the company’s over-arching “Mobilizing your world” tagline.

“We love [the campaign] because it also leverages a part of our history. The ampersand is a part of our DNA; we love bringing that forward,” Dietsch says. "'Mobilizing your world' is about the whole company. It’s all about the ways you live your life. 'The Power of &' is a campaign that is all about how we bring [that] to life.”

Other spots in the campaign depict a hospital preparing for an onslaught of patients in the face of a hurricane and how a company maintains data security with the help of AT&T.

The effort will air heavily during the Masters Tournament because the tournament draws an audience heavy on business leaders, Dietsch says.

“The viewership of the Masters is comparable to our audience. It brings a lot of C-suite watchers,” she says. After the tournament, the campaign will roll out into a 360-degree integrated effort that will include print, radio and other elements.

1 comment about "AT&T Finds Business Message In Own Logo".
Check to receive email when comments are posted.
Next story loading