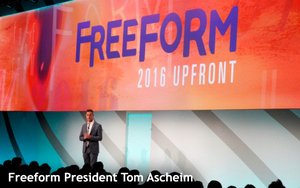 The show was one of a long list of new shows in production and in development that Freeform announced Thursday night at its 2016 upfront presentation in New York.

The event was staged to promote Freeform’s 12- to-34-year-old target audience for the advertising community.

“This is not another guy sitting behind a desk, but a take-no-prisoners, half-hour panel that covers all of the stuff our young audience really cares about -- from politics to food to sex and more,” said Karey Burke, executive vice president of programming and development of “Later Bitches.”

She said the idea for “Later Bitches” was brought to Freeform by producers Jennifer Flanz and Elise Terrell -- Emmy-winning former executive producers of “The Daily Show.” The two are now developing “Later Bitches” for Freeform.

Other details were not revealed, such as a premiere date, host or time period for “Later Bitches.” Nor is it known whether “Later Bitches” would air nightly or weekly on the Disney-owned cable channel.

The “Later Bitches” announcement came about three-quarters into a one-hour upfront presentation that was held at an event space in Tribeca. In addition to its many programming announcements, Freeform’s upfront was designed to define and position Freeform for its audience of ad reps.

The network has been known as Freeform only for about four months. It was launched on Jan. 12 following a rebranding from ABC Family.

“It is so much fun being up here representing our beautiful new Freeform brand,” said Laura Nathanson, Freeform’s executive vice president of sales and marketing. “Let’s start with our audience. We know that our 12-34s are hard to reach. They’re changing the way entertainment is being consumed faster than any other group and, impressively, we reach them in masses,” she told the ad reps.

She then broke down the audience’s consumption of the network’s content on various platforms to the number of minutes consumed. “Each month, we connect with more than 31 million viewers who watch more than 7 billion minutes of Freeform across all our platforms,” she said.

Since its launch in January, Freeform has defined its audience as “becomers” -- teens and young adults who are growing up and finding their places in the world. With this target audience in mind, Nathanson made her pitch for upfront dollars.

“We’ve invested heavily in understanding young adults,” she said. “Last year, we launched the Becomer Insight Group uniting all our work under a banner brand, BIG. … We’d like to put BIG to work for you and your brands. Our BIG insights and the audience numbers make clear that young adults demand choice and control over what, how and when they watch. We are building a multiplatform world for them and for you,” she said.

With Ben Sherwood, president of the Disney/ABC Television Group, in the audience, Freeform President Tom Ascheim defined Freeform’s position within the Disney family.

“Under Ben’s leadership, Freeform gets to live in an incredible television neighborhood,” Ascheim said from the upfront stage. “You kind of have Disney [Channel] on the left [and] ABC on the right [and] we get to take our place as the young-adult television brand for the Walt Disney Company,” Ascheim said.

Following the appearances by Nathanson and Ascheim, the bulk of Freeform’s presentation was taken up by Burke’s programming announcements. She first focused on this coming summer, which will see the premieres of two new scripted shows and one non-scripted series, plus the season premieres of four returning shows.

The three new ones are: “Dead of Summer,” a horror series about a group of young teens who are terrorized at their summer sleep-away camp; “Guilt,” a drama tracing the mysterious murder of a young woman during a wild party in London and the roles that various partygoers may or may not have played in her murder; and “Cheer Squad,” a nonscripted series about a championship cheerleading squad from Canada called the Great White Sharks. The returning shows are “Young & Hungry,” “Baby Daddy,” “The Fosters” and “Pretty Little Liars.”

Freeform also announced two new shows set to premiere in 2017: “Beyond,” a drama series about a young man who awakens from a 12-year coma with various (and as-yet unspecified) superpowers; and “The Letter,” a nonscripted series about how a group of female best friends reacts after they receive anonymous letters from each other that identify weaknesses and/or character defects their friends want them to change.

Other new series announced by Freeform were “Famous In Love,” a scripted drama starring Bella Thorne about the life of a young Hollywood starlet, and “Marvel’s Cloak and Dagger,” a live-action adaptation of the comic books about the superhero duo known as Cloak and Dagger. No potential premiere date was given for these.

Also, Freeform announced the production of a pilot for a proposed scripted series about a fashion magazine. Titled “Issues,” the show is “inspired” by the life of Joanna Coles, editor-in-chief of Cosmopolitan.