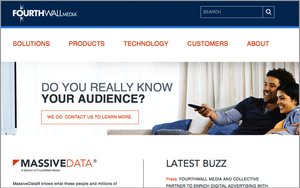 Collective will use FourthWall’s second-by-second set-top-box data for its VISTO advertising system and its Audience Engine digital advertising products.

For two years, the two companies have worked together for advertisers on audience segmentation. FourthWall set-top-box viewing data comes from about 2 million U.S. households in 90 markets.

Bill Feininger, president of FourthWall Media, told Media Daily News that the deal with Collective will extend further: “Attribution will become part of this as they create their own custom segments.”