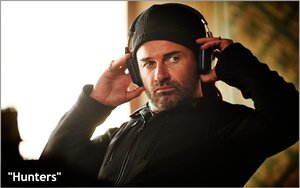 How does a science-fiction network get in on TV’s appetite for producing shows about the domestic War on Terror?

Turn the terrorists into aliens -- and not the foreign kind either.

What’s so gooey about it? Mainly, it’s the aliens’ innards. These wet and rubbery internal organs get showcased at several points in the series premiere as investigators in a top-secret government branch involved in the business of tracking alien terrorists examine the anatomy of these beings.

As a result, you get a lot of close-ups of organs and other tissue covered in a shiny, sticky, viscous substance that makes squishy noises and stretches like mozzarella in a Pizza Hut commercial when pathologists remove these organs from an alien’s body cavity. The fact is, these organs look like they’re rubber, signaling that the more of these kinds of sci-fi TV shows one watches, the less one is able to accept the illusion that this stuff is real -- no matter how elaborate the special effects.

Suffice it to say that the goo flies when these aliens come into contact with members of this government group known as the Exo-Terrorism Unit, or ETU. Where are these aliens from? Well, they’re not human, and one of the investigators even suggests at one point that they might not even be from outer space. In the premiere episode, their origins are not yet revealed. They look just like humans, though -- at least on the outside.

One thing the investigators do know about these humanoids is: They are difficult to track and hard to kill. Among other characteristics, they possess an uncanny ability for eluding capture by jumping from tree to tree with lightning quickness.

And they can’t be killed with mere bullets, even when shot in the face from an inch away. Instead, they can only be stopped with handguns or rifles that produce a narrowly targeted sonic boom capable of making these aliens’ heads explode (which is how the goo then flies and splatters everywhere).

The title of this show -- “Hunters” -- is the name the feds have given to these aliens. The show takes pains to position these mysterious Hunters as a terrorist group nursing an unspecified grievance that makes them hate humans so much that they think nothing of killing them without mercy.

“Hunters make Isis seem like girl scouts!” exclaims one of the government investigators, applying the time-honored “girl scouts” metaphor. At such times, I like to apply this timeworn piece of advice for writers: Avoid clichés like the plague.

In the premiere episode, the parallels with the terrorist groups that bedevil us here in the real world continue when the feds obtain an audiotape in a raid on a Hunter lair. The tape emerges as a Hunters “manifesto” on which an alien’s voice is heard stating that the Hunters are angry, they’re everywhere and they’re promising to bring bloodshed and death to humans whenever and wherever they can.

The point is made: Whatever these things are, they’re terrorists and they’re capable of doing very cruel things. Their leader is a handsome devil played by Julian McMahon (seen in the above photo), who we first see in a grim, rundown house wearing headphones and listening to music as a woman lies shivering and naked in a fetal position in a small cage waiting for him to murder her.

It’s a jolting, off-putting way to start a TV show. And it raises your expectations that more such psycho-sadistic behavior is on the way. Sure enough, later in the show, you’ll get to see how this non-human terrorist kidnapped this woman by turning up by surprise in her kitchen one afternoon and then immobilizing her with some sort of supersonic handheld device of his own. Oh, and I forgot to mention: The woman is deaf and he cruelly removes her hearing aid and throws it on the floor.

Terrorism, sadism, and gun battles in which combatants’ heads and midsections explode -- this is what is offered up for entertainment on “Hunters.” I think I’ll pass.