NBC Uses Its 'Voice' As Launchpad For New Shows 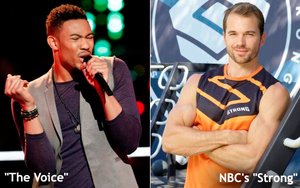 It seems as if NBC will not launch a new show these days without giving it a push from “The Voice.”

The problem is, the strategy does not always work. And the times that it does work, it might have more to do with the quality of the new show than whether “The Voice” aired just before its premiere.

The latest show to get the “Voice” launch treatment is a new competition show premiering Wednesday night (April 13) called “Strong.” It's a fitness competition series hosted by volleyball star Gabrielle Reece. Sylvester Stallone is one of its executive producers. He provides the show’s introductory narration in his famously deep voice.

The “Strong” premiere actually consists of two back-to-back episodes starting at 9 p.m. Eastern following a one-hour episode of “The Voice,” which ordinarily doesn't even air on Wednesday nights.

But when it comes to pressing “The Voice” into service as a lead-in for a new show, NBC is making it appear on its schedule in the lead-in position Wednesday as if by magic.

In theory, there’s nothing wrong with this strategy. Networks are free to try and do whatever they can to give a new show a bit of a leg up with a show that is a proven audience draw, in the hopes that a healthy portion of that show’s audience will stick around for the new show airing just after it.

Unfortunately, however, this wish is rarely fulfilled. Two recent examples provide an illustration. One of them was the debut on March 15 of the new NBC sitcom called “Crowded” about two empty-nesters whose grown children move back in with them. On that evening, a two-hour episode of “The Voice” drew an audience of 11.08 million. The premiere episode of “Crowded” directly after “The Voice” drew 6.52 million.

A week later, on March 22, the new medical drama “Heartbeat” debuted after “The Voice.” The singing-competition show that night had 10.76 million viewers. The “Heartbeat” premiere drew 6.3 million.

While the audiences dropped off sharply from “The Voice” in both of these incidences, it’s also true that debut viewership amounting to more than 6 million people is actually considered to be pretty good by the standards of network prime-time ratings these days.

Whether a show can then capitalize on this sampling is another story. The ratings for “Crowded,” for example, declined in subsequent airings to a low of 3.47 million on April 3, then had a slight uptick to 4.19 million April 10. “Heartbeat” also declined since its debut. Its most recent episode drew 3.9 million viewers on April 6.

What was the difference? “Little Big Shots” is a very attractive show with a proven formula -- kids acting cutely. On the other hand, “Heartbeat” and “Crowded” were not as easy to like (this is an understatement when referring to “Crowded” in particular).

They’re not great shows. “Heartbeat” is a hospital drama that feels like a dozen other such shows that have come before it. The same can be said for “Crowded” -- another family sitcom in which almost nothing the characters say or do would ever be heard or done in the real world most people live in.

So how are the prospects for “Strong” following “The Voice” on Wednesday night? On this show, a group of overweight women will have an opportunity to undergo intensive strength training by a group of male professional personal trainers billed as the best in the world. The action on the show takes place on one of those elaborate facilities that TV seems to specialize in building these days for these kinds of physical-fitness reality shows. This one even includes a four-story “Elimination Tower” that figures into the show’s climactic challenge.

Personally, I have no real feel for these weight-loss competition shows and rarely watch them. Whether or not the audience for “The Biggest Loser” and other shows like it will migrate toward “Strong” I have no way of predicting. I suspect NBC will make its money on it, however. It’s one of those shows that’s built for in-show sponsorships -- in this case, Fitbit and EAS, a marketer of protein supplements and the like, get a great deal of on-screen visibility.