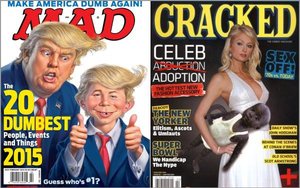 It probably means nothing, as many coincidences do, but I just couldn’t let this one go by without comment.

It was the appearance this week, on two consecutive days, of TV-related stories about Mad magazine and Cracked. When I first saw these two furshlugginer press releases (to borrow a word from Mad) arrive in my e-mail inbox, I was shocked that these two brands were still considered valuable enough for two TV companies to make investments in them and/or plan projects around them.

The Mad announcement came on Monday from the CW network, which proudly announced it is reviving the old “MADtv” sketch comedy show. This time around, the show will be seen in prime time, said CW, which has ordered eight one-hour episodes. The press release had no premiere date or time period.

The old “MADtv” -- inspired by the adolescent humor of Mad magazine -- ran on Saturday nights at 11 Eastern from 1995 to 2009 on Fox. Many of its cast members went on to later fame, including Taran Killam (“SNL”), Jordan Peele and Keegan-Michael Key (“Key & Peele”), Simon Helberg (“The Big Bang Theory”), Nicole Sullivan (“The King of Queens”) and Will Sasso (“The Three Stooges” movie).

The Cracked announcement came on Tuesday from E.W. Scripps Company, owner of 33 TV stations, 34 radio stations and various digital platforms such as Midroll Media and Newsy. While Scripps is a TV company, at least partially, the company’s Cracked announcement was not about adapting the old humor mag into a TV show. Instead, Scripps bought Cracked for $39 million in cash mainly so that it could own the Cracked Web site, Cracked.com.

The deal made news, so much so that it became possible for most of us to learn more about Cracked than we ever previously thought possible. For example, I learned from the news coverage that Cracked ceased to be an actual magazine back in 2007. (The issue with the Paris Hilton cover seen next to the Mad magazine cover above was one of the last Cracked issues.) Who knew?

Apparently, its owners -- an outfit called Demand Media -- made the decision to shutter the magazine in favor of investing its resources entirely in growing the Web site. Scripps was evidently so impressed with the company’s efforts at building the popularity of Cracked.com among Millennial males that it bought the brand -- lock, stock and barrel. “Cracked ranks in the top tier of digital humor-focused brands and has a strong following among younger consumers, especially affluent millennial males,” the Scripps press release said.

The release took a serious tone to report on the purchase of this very unserious comedy company. Here’s the quote the corporate communications department wrote for Adam Symson, chief digital officer for Cincinnati-based Scripps: “Cracked is a natural extension of the Scripps strategy to take a leadership position in high-growth content marketplaces,” said Symson. “Scripps will help Cracked reach new and larger audiences as it continues to build its brand on the web, in over-the-top video and audio and on other emerging platforms.”

A prepared statement issued in the name of Rich Boehne, president, chairman and CEO of Scripps, adopted the same tone: “Cracked is the expert in using clever humor to engage a younger audience that is very loyal to its brand,” said Boehne. “Its editorial vision brings a fresh perspective to the way the next generation creates and consumes news, information and entertainment.”

The seriousness of the prepared quotes is appropriate on one level, of course, since Scripps is spending $39 million on this purchase, which is not exactly chicken feed. On the other hand, the Scripps name is associated by most of us in connection with legacy media such as TV, radio and newspapers (the latter of which were spun off into another company last year).

I read somewhere yesterday that the long-time corporate motto of the E.W. Scripps Company is (or was): “Give light and the people will find their own way.” This motto was evidently coined in a very different age.

I do hope Scripps’ investment in Cracked does not turn out to be a loser for them, but I’m biased. As an adolescent, I was about as big a fan of Mad magazine as you could find anywhere. I eventually donated my collection of Mads to the “special collections” section of the Northwestern University library, which maintains a trove of comic books.

As for Cracked, we Mad magazine fans never read it. For us, Cracked and Mad were like Hydrox and Oreos (respectively). So how did Cracked suddenly emerge as this big draw for Millennial males? Like so many other aspects of media today, I have no idea.