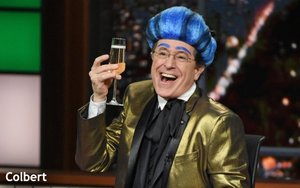 A network doesn’t suddenly assign a new showrunner to a show unless the network is concerned about the show.

Such was probably the case when CBS made the surprise announcement last week to move Chris Licht, executive producer of “CBS This Morning,” the network’s morning news show, to late night, where he’ll take over as executive producer and showrunner on “The Late Show with Stephen Colbert.”

Despite CBS’s best efforts -- such as the prepared statements in its press release in which everyone was positioned as ready to welcome Licht to “The Late Show” with big smiles and open arms -- it was hard to come to any other conclusion than that the “Colbert” show is in some sort of trouble.

There is lots to talk about here. For one thing, an observer might wonder how a background in network news programming -- with particular experience in mornings -- might prepare a guy like Licht to assume the role of boss on a late-night comedy show.

As CBS’s press release pointed out, Licht spent the last 10 years in morning television in news environments, first as co-creator and executive producer of “The Morning Joe” on MSNBC, and then the last five years on “CBS This Morning.”

CBS is pleased with what Licht has done with the morning show. Ratings are better than they have ever been, even if the show is still in third place behind “The Today Show” on NBC and “Good Morning America” on ABC.

There are some areas that would seem to be similar on a morning news show like “CBS This Morning” and a late-night entertainment show like “Colbert.” For example, both shows depend on the topical and timely booking of interesting guests. To some extent, these guests are often the same -- actors and actresses with movies or TV shows to promote. Sometimes, they’re newsmakers too, such as presidential candidates.

But it would also seem as though the job of riding herd on a group of late-night writers and segment producers -- basically gag men (and the occasional woman) -- would be very different than managing a morning news crew. Sure, both groups are supposed to produce programming that is “entertaining” each in its own way. But the styles of entertainment on a morning news show and late-night comedy show seem like two completely different things.

I don’t need to be reminded that comedic talk shows and TV news have melded together over the past decade or so -- to such an extent that, to some, the two have become indistinguishable. Or at the very least, many people claim they get their news primarily from late-night comedians. Fair enough, but TV news and TV comedy are still not the same thing (feel free to leave snarky comment below debating this point).

The issue that was left unaddressed in CBS’s press release was why. No reason was given for the company assigning Licht to this new job in which he’ll outrank the producers who, up until now, have run the show. That’s a significant move for a network to make.

With the title of “showrunner,” one assumes that Licht will have the power to shuffle the staff, rearrange the order of segments, make decisions about guest bookings, possibly even weigh in on comedy creation, and veto decisions made by others who are not accustomed to being vetoed.

Clearly, CBS wants the “Colbert” show to change somehow. While the network periodically releases press announcements pointing out that the show’s audience has grown year-to-year, it lags behind “The Tonight Show Starring Jimmy Fallon” and seems locked in a duel, more or less, with “Jimmy Kimmel Live” on ABC for second place.

The fact is, CBS likely expected Colbert to improve on the “Letterman” show’s numbers more significantly than he has. I have a feeling CBS felt Colbert might have had the potential to increase the “Late Show’s” audience to such an extent that by now he might be dueling with “Fallon” for first place rather than “Kimmel” for second.

My own observation is that despite Colbert’s insistence in the weeks leading up to the show’s premiere last September that he would jettison the persona he worked so hard to hone on his Comedy Central show “The Colbert Report,” he hasn’t done so. To many, he comes across on “The Late Show” as that same guy -- which is to say, he still hasn’t found his “Late Show” voice.