USA Network Kicks Off 'We The Bold' Marketing Campaign 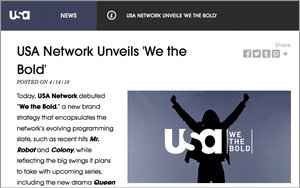 Looking for a more edgy marketing theme, USA Network is starting up a new brand marketing strategy, “We the Bold.”

The NBCUniversal cable network will change its new branding effort to the “Bold” theme incorporating on-air elements from the network’s action dramas, including “Mr. Robot” and “Colony.” It will also include USA’s WWE programming.

All promo spots end with on-air visual theme: “We the Bold.”

“‘We The Bold’ reflects the kind of stories we want to tell,” said Chris McCumber, president of entertainment networks for NBCUniversal Cable Entertainment, in a release, “rich, captivating stories about unlikely heroes who defy the status quo, push boundaries, and are willing to risk everything for what they believe in.”

USA also intend to incorporate this brand them into upcoming series, including “Queen of the South,” starting  this summer.

More on-air marketing from existing shows will appear with Gabriel Macht (who plays Harvey Specter “Suits”); Todd Chrisley from “Chrisley Knows Best”; and Alice Braga, who plays Teresa Mendoza on the forthcoming “Queen of the South.”

USA Network prime-time ratings sank 9.5% to 1.65 million overall average viewers in the first quarter 2016 versus the same period in 2015.