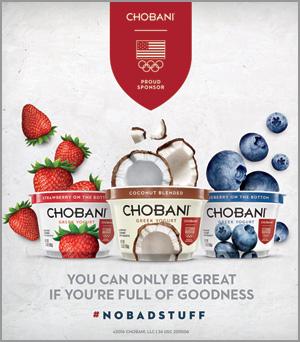 Chobani is gearing up for its official Team USA yogurt sponsorship for this summer’s Olympics and Paralympic Games in Rio de Janeiro.

This will be the third Olympics sponsorship for the brand, which in 2014 extended its commitment through 2020.

Chobani’s “Naturally powering Team USA” tagline for the London and Sochi Olympics has this time been evolved to “You can only be great if you’re full of goodness,” accompanied with #nobadstuff for social media purposes.

For its Rio “Team Chobani” brand ambassadors roster, Chobani selected Olympians and hopefuls who embody the theme because of their good deeds as well as their athletic achievements, CMO Peter McGuinness tells Marketing Daily.

The concept: Team Chobani’s diverse members share the brand’s mission of eliminating “bad stuff” from their lives in favor of “goodness and positive choices,” McGuinness says.

The athletes will be featured in television, digital and in-store advertising from the brand’s lead creative agency, Opperman Weiss.

The TV and video ads, which aren’t yet being previewed, will thematically link the athletes’ positive philosophies and personal stories with the brand’s commitments to using only natural, non-GMO ingredients; local, “responsible” sourcing (including humane treatment of dairy cows); and “transparent” labeling. Chobani’s marketing will also promote its donation of 10% of its profits to charities through the Chobani Foundation, which seeks to “empower positive, sustainable change locally, regionally and globally.”

The brand has substantially increased its Olympics investment for the Rio games, with more commercials, a “much bigger and deeper” social media effort, and more long-form videos and on-site activations, reports McGuinness.

Chobani views the Olympics not as an opportunity to promote a new spin on the brand, or to “borrow brand equity” from the event, but as a platform that enables the brand to talk in an “authentic” way about its food and values — to “accentuate and amplify what’s true about Chobani and what’s true about the Olympics,” McGuinness says.

As the official yogurt provider, a variety of Chobani’s products are  served at Team USA’s training centers and incorporated into their menus — a solid opportunity for Chobani to underline its “twice as much protein as regular yogurt” product claim along with its all-natural messaging.

(In a presumably one-off scenario, the brand ended up benefitting from massive free media coverage during the 2014 Sochi games, after the Russian government, citing customs issues, blocked a shipment of Chobani products meant for the U.S. athletes.)

During the Olympics promotional period, all Chobani products packaging will feature the official Team USA shield and Olympic rings.

The brand’s stream of new extensions and product platforms — most notably its Flip format, which was launched in Fall 2014 and as of September 2015 had a 35% share of the total yogurt mix-ins segment and 50% share of Greek mix-ins — are part of its strategy of growing by getting consumers to consume yogurt throughout the day.

That continues to be supported by heavy advertising investments. The May 2015 introduction of the “Love This Life” umbrella platform has been followed by extensions including “Break You Make” for the Flip line and the competitor-bashing Simply 100 campaign. That Simply 100 push garnered media coverage by provoking Dannon and General Mills to pursue (and win) preliminary injunctions forcing removal of some statements from the ads.

The innovation and marketing investments are paying off. Chobani has been challenged by Greek entries from Dannon and General Mills, as well as a 2013 crisis resulting from mold in some products, but it remains the #1 Greek brand, and reports that it’s also gaining share within the overall yogurt category.

Chobani cites Nielsen Xaoc Scantrack data for the four weeks ended January 23 showing its Greek share at 36.1% and its overall yogurt market share at 19.3% -- the highest in its history. The company also reports that its “topline sales growth” is up 25% year-over-year.