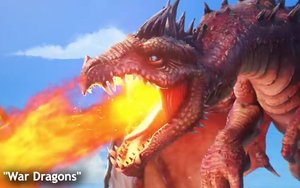 Calling it the game’s “second phase” of growth, Pocket Gems is releasing a TV commercial for its War Dragons mobile game that juxtaposes the innocence of “Dragon Tales” with the violence of “Game of Thrones.”

The spot, from agency Wexley School For Girls, begins with pink, purple and blue anthropomorphized dragons playing with children singing, “It’s happy here, every day/All we do, is sit and play.” As they continue in their hand-drawn rainbow-framed environment, they’re attacked by a computer-animated flame-breathing dragon. Chaos naturally ensues as the children’s programming dragons are clearly no match for the fire-breather.

The spot was animated by J.J. Sedelmaier, who worked on programs such as “Beavis and Butt-head,” “Harvey Birman, Attorney at Law,” and “Saturday Night Live’s Saturday TV Funhouse.” In a statement, Sedelmaier said he was drawn to the idea of contrasting “the children’s programming we all grew up watching with the intensity of the gaming realm.”

The television spot will begin airing nationally this month. The campaign coincides with the launch of the game on the Android mobile platform.

“War Dragons’ first year was all about refining the game to make it as kick-ass as possible. We’ve drastically improved everything from the art to the multiplayer components, and it really shows,” said Pocket Gems’ founder Harlan Crystal, in a statement. “As we enter our next phase of growth, we wanted something different for our first big TV spot and we couldn’t be happier with how it turned out.”