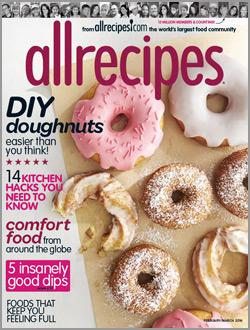 Meredith Corporation will expand the Allrecipesbrand through a new partnership with Pacific Magazines, a division of multiplatform media company Seven West Media in Australia.

This isn’t the first time the two publishers have worked together: Meredith and Pacific Magazines are longtime partners for Better Homes and Gardens in Australia and New Zealand.

In the region, the brand includes a nationally broadcast television program and is one of the top magazines for women, per a company statement.

"Pacific Magazines and Meredith enjoy a long and successful partnership," stated Peter Zavecz, CEO of Pacific Magazines. "This new partnership allows us to bring Australian and New Zealand audiences the world's leading digital food brand in Allrecipes, which fits with our business model on a number of levels.”

Allrecipes.com has 19 sites across 24 countries in 12 languages. Allrecipes.com.au is one of the top three largest food sites in Australia and New Zealand.

Under the new multiyear agreement, Pacific Magazines will lead client and consumer-facing activities, including advertising sales and marketing. Pacific will also use its local media properties to promote, expand and monetize the Allrecipes brand.

Allrecipes will head all site innovation and management activities, including platform and product development, content management, search engine optimization and site hosting from its global headquarters in Seattle.

Recently, Meredith has been paying extra attention to beefing up Allrecipe’s digital presence. The company redesigned the logo, layouts and photography and editorial content for Allrecipes magazine, beginning with the April/May 2016 issue. The changes were inspired by the new Allrecipes.com, which relaunched last fall.
brand marketing, food, magazines
Next story loading