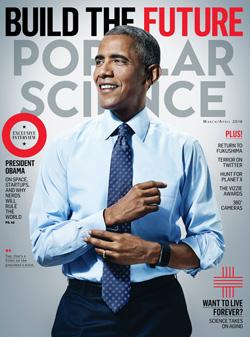 Just two months ago, design director Todd Detwiler also left the Bonnier-owned title. He has since been replaced by Chris Mueller.

Ransom joined Popular Science as executive editor in 2011 before being promoted to editor-in-chief in 2013. Prior to that, he held editorial roles at National Geographic Adventure and Arthur Frommer's Budget Travel.

Bogo had been with Bonnier for over a decade, joining the company in 2005 as a senior science editor for Popular Mechanics before move to Popular Science in 2012.

A Bonnier spokesperson told Folio that Popular Science is currently interviewing for a new editor-in-chief.

This is at least the second shuffling of a Bonnier editor-in-chief position in the last month. Jennifer Ceaser was ousted at Islands Magazine.The job was combined under Erika Hueneke, who was running Destination Weddings & Honeymoons, the NYP reports.

Popular Science plans to continue focusing on developing content across channels, according to a spokesperson, who also told Folio that Facebook video views jumped 308% in February.

Average circulation for the monthly title dipped about 4.4% year-over-year in 2015, according to the Alliance for Audited Media, but average monthly unique visitors to PopSci.com jumped 20.3% over the same time period.
magazines, management, science
Next story loading