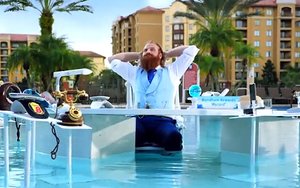 Wyndham Rewards is kicking off a summer promotion that includes a nationwide partnership with Six Flags theme parks.

“We’re always on the lookout for partners that we believe will enhance the experience of our members and that reinforce our positioning as the world’s simplest, most generous loyalty program,” Brodsky tells Marketing Daily. “Six Flags is one of the premiere theme park operators in the U.S. and while this is our first time working together, it’s a natural fit. We’re incredibly excited by the added perks Wyndham Rewards members will be able to experience at their parks across the country this summer.”

In addition, Six Flags and Wyndham Rewards will host a Wyndham Rewards event on July 14, where members can enjoy even more perks, including a special ticket discount and access to exclusive ride times on select rides after the park closes.

Two TV spots feature the return of the Wyndham Rewards Wyzard, once again played by Kristofer Hivju of “Game of Thrones.” The spots detail the current program offering, which runs through Oct. 31 and offers $100 in gift cards for staying twice at qualified properties.

“We have a multi-year deal with Kristofer Hivju, which is incredibly exciting, not just because of his rising role on ‘Game of Thrones,’ but because the Wyndham Rewards Wyzard in and of his own right has proven a huge success,” Brodsky says. “Members love Kristofer and the whimsical air that he brings to the role and we couldn’t be happier to bring him back for this latest campaign.”

The program has added 5 million members since launching last May.

“When we launched the new Wyndham Rewards, we set out to turn the loyalty landscape on its head,” Brodsky says. “One year later, the response has been incredible. Our free night redemptions have spiked by more than 92% percent compared to last year. Our members are really responding to the promise of program that’s simple to understand and truly generous in its rewards.”