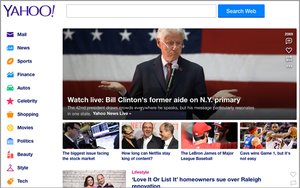 Verizon could become the last Yahoo bidder standing. Of the original 40-company roster expressing interest in acquiring Yahoo's media and advertising assets, including search, The Wall Street Journal reports AT&T, Alphabet's Google, IAC/Interactive, Comcast and others have backed away.

If Verizon wins the bid, AOL's Tim Armstrong aims to use the assets to build a global "digital ad empire." The data from the deal will make ad targeting much stronger and provide streaming media platform on mobile.

Telecom companies -- specifically Verizon -- are betting on video services and online advertising and targeting using data as the next growth drivers. In 2016, U.S. adults will spend an average of 1 hour and 8 minutes each day watching digital video, 21.6% of time spent with video overall, according to eMarketer.

Verizon’s interest in AOL was based more on gaining access to their ad-tech and data rather than the content, and its interest in Yahoo is pretty much the same, said Mike Grehan, CMO and managing director at Acronym.

"It’s going to be interesting, because Verizon has over 100 million wireless customers," Grehan said. Imagine, with all of the data they have on their own customer base, plus all of the data from the AOL and Yahoo, how focused their ad targeting would become."

Pointing to a patent, Grehan said if the data from large retail chains as customers of Verizon’s new advertising platform is cross-referenced, it brings in hyperlocal intent-based proximity marketing.

"It will be interesting to see what happens as Yahoo continues to struggle picking up the organic search market, and whether Verizon backs away from the paid-search business because of their relationship with Bing," said Roger Barnette, president at IgnitionOne.

Certainly it will boost Verizon's status in the digital advertising space on the Web and make them stronger contenders against Google and Facebook. But it’s the thought of the "carrier" entering the mobile advertising space that really changes the landscape.

Verizon's acquisition of Yahoo's assets could change the landscape not only in the U.S. but globally. Rob Griffin, chief innovation officer at Almighty, said Japan could become the shiny object that clinches the deal. Verizon would use the assets to strengthen AOL's advertising and mobile services not only in the U.S., but also in Japan.

AOL sold its Japan Internet services to eAccess -- a Tokyo-based broadband wholesale provider -- in 2004, before rebuilding in 2007 through a joint venture with Mitsui & Co., most recently strengthening its services in programmatic video services under the brand of Adap.tv.

"Verizon has always been about data and content and Yahoo offers lots of both," Griffin said. "Given their inability to monetize this well, I can see the appeal to Verizon.