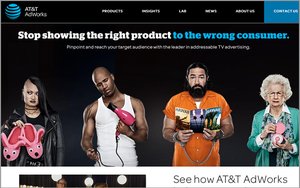 Hoping to push its bigger addressable advertising efforts, AT&T AdWorks -- now with DirecTV in its stable -- will start up a new campaign in time for the upfront advertising market.

To make a clearer point about addressable advertising, the campaign --  called “The Point of More Return” -- offers up a series of humorous videos to help advertisers to stop showing their product to the wrong consumer.

For example, one video shows perplexed kindergarteners who are not particularly interested in a pitch from life insurance salesman in their classroom.

In another, senior citizens in a nursing home are getting a heavy-duty energetic pitch from a salesman for the latest sports car. Another spot has supermodels confused by a salesman with a power tool demonstration in trying to sell the latest steel-toed construction boot.

In a print ad, a sumo wrestler is grimacing while standing in front of a compact car. Another print ad has a young bald man quizzically looking at a blow dryer. The tagline for all of these creative pieces is: “Stop showing the right product to the wrong customer.”

The campaign -- developed in-house by AT&T’s internal creative team -- starts this month and will run through the end of the year on digital, print, out of home platforms, industry conferences, and social media.

AT&T closed its $49 billion deal for DirecTV last July -- well after much of last year’s upfront advertising activity had commenced.