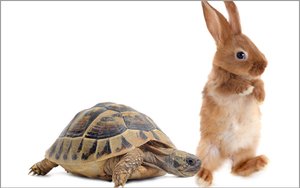 Alphabet -- Google's parent company -- and Microsoft will report quarterly earnings Thursday. In a roundup of predictions, analysts and data firms prepare investors and industry insiders to expect slower growth for both Internet giants.

Similar to Yahoo, analysts see the spotlight shining on mobile and video ad revenue. Google owns a third of all mobile Internet ad revenue worldwide, rising more than four times as fast as its overall ad revenue, estimates eMarketer. By 2018, mobile ad streams will continue to grow nearly twice as quickly as the total.

YouTube also contributes to Google’s worldwide ad revenue growth this year, according to eMarketer. Net ad revenue at the video site rose 40.6% last year, and will continue to grow by 21.1% this year.

Raymond James analysts estimate $16.78 billion in net revenue for the first quarter in 2016, compared with a consensus of $16.57 billion. The first also estimate Google sites growth of 23%, compared with 20% in the fourth quarter of 2015.

Growth for Google during the first quarter of 2016, per Raymond James, will come from mobile search and Product Listing Ads. The report points to a study from Kenshoo that estimates search spend among the company's clients rose 13% in the quarter year over year, compared with 8% in the fourth quarter of 2015.

Based on 10 analysts' forecasts, the consensus EPS forecast for Alphabet in the first quarter of 2016 is $6.36 -- up from $5.2 in the year-ago quarter, according to Zacks Investment Research.

Analysts and data firms also expect Microsoft to see slower growth this year, yet gain share of the worldwide search marketing revenue. After a 20.8% rebound in 2015, eMarketer expects to see 15% growth to nearly $3 billion, though still below 2013 revenue levels.

Microsoft, which also reports first-quarter 2016 earnings Thursday, earned 3.3% of net search ad revenue globally, up from 3% in 2014. This year, the company’s share will rise again, to 3.4%.

In the U.S., Microsoft took 8.4% of search revenue market share last year, but by 2018 the company should take 8.6% of net U.S. search ad revenue, according to eMarketer.

Based on 12 analysts' forecasts, the consensus EPS forecast for Microsoft in the first quarter in 2016 is $0.63, up from $0.62 in the year-ago quarter, according to Zacks Investment Research.