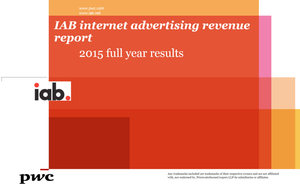 Nearly half of mobile revenue total ($11 billion) comes from display-related mobile formats such as video, the IAB stated. Mobile likely gets its spend from other media, digital media and through experimental budgets, per the report.

Who spends the most in digital advertising? Retail advertisers still top the list, responsible for 22% of spend. Auto and financial services each account for 13% of 2015 revenue.

And don't discount eSports--organized video game competitions--as a valuable source of revenue in the future. Matt Hobbs, partner at PwC, said during an IAB webinar that wearables and eSports will both offer opportunities for future ad revenue, with the eSports economy expected to hit $463 million in revenue for 2016, up 43% over 2015.

The data from the report is supplied by digital ad sellers. The IAB's Internet ad revenue report from Q4 and full-year 2014 found online ad spending grew by 16% year-over-year in 2014, from $43 billion to almost $50 billion.