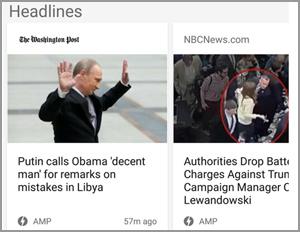 Trying to keep up with Facebook's Instant Articles initiative, Google is expanding its Accelerated Mobile Pages (AMP) project to Google News on Android, iOS, and the Web.

Google added AMP to its search results on mobile, earlier this year.

“For too many people, reading the news on their mobile devices can be slow and clunky, forcing them to abandon a site,” Maricia Scott, engineering director at Google News, notes in a new blog post.

At the top of Google’s News page, mobile users will now find an AMP carousel filled with headlines and stories of the day. They can browse up to 14 headlines there, and click any article to jump into the viewer, which will be optimized for fast-loading AMP articles.

In the viewer, users can also swipe to continue reading other stories from the carousel. Within the regular News stream, “AMPlified” articles will be labelled with the AMP lightning bolt icon. That way, users can know these will be fast even before they click.

In tests, Google has found that AMP stories load an average of four times faster, and use 10 times less data than the equivalent “non-amp’ed” result.

“In many cases these stories will load instantly,” according to Scott.

Standing in the way of Google’s efforts, Facebook is doing everything possible to attract publishers to its Instant Articles initiative. In late March, it added video ads to Instant Articles, and immediately began letting partner publishers run animated ads and “click to play” videos.

The news followed Facebook’s decision to invite any and all publishers to participate in Instant Articles by April 12.

With Instant Articles, Facebook claims that mobile load times are 10 times faster than on the sites where the content comes from. For publishers, Facebook is offering them 100% of the revenue from ads they run inside the service, while taking a reported 30% of revenue from ads that it sells through the Facebook Audience Network.

Google has not shared it revenue sharing terms for AMP.