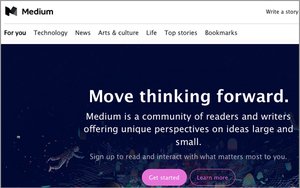 Medium seems to be undergoing a transformation from blogging platform to publishing platform, and the change is paying off. The company has raised another $50 million, just a few months after it raised $57 million last fall.

According to a post on Medium’s blog, the Series C financing comes from Spark Capital.

Medium’s CEO Ev Williams has worked with Spark before, via Bijan Sabet. Williams and Sabet worked together at Twitter, where Williams was previously chairman and CEO.

This time around, the Spark investment is led by Kevin Thau, who is also Williams’ former Twitter colleague.

Previous investors Andreessen Horowitz and GV (formerly Google Ventures) are also “participating significantly in this round,” as is Williams himself.

Medium raised $57 million of Series B financing just last September. The company has now raised more than $130 million, according to re/Code.

Williams also announced in the post that Ben Horowitz and Judy Estrin have been added to Medium’s board of directors. David Sze from Greylock Partners (which raised Medium’s Series A financing) is stepping down after more than two years serving on the board.

“Though we raised our Series B of $57M just last September, we decided to bolster our resources now given the demand we’ve seen for the vision we are building toward,” Williams wrote in the post.

As Publishers Daily reported a few weeks ago, more than a dozen independent sites are migrating to Medium’s publishing platform, including The Awl, Pacific Standard and The Bold Italic. Medium now offers design tools for publishers to customize their sites, custom URLs and a migration tool to make it easier to move a site to Medium.
funding, online publishing, web sites
Next story loading