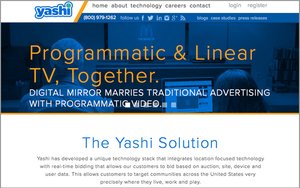 TV commercials will continue to be distributed on digital platforms for approximately three minutes, available within a station’s particular designated market area (DMA).

Yashi plans to roll out this platform by the end of this year.

Initially, it will only be exclusive to the 103 Nexstar stations.

Earlier this year, Nexstar entered into an agreement to acquire Media General for $4.6 billion -- a long fought battle for the TV station group. The deal will give Nexstar 171 TV stations in 100 markets covering 39% of U.S. TV households.