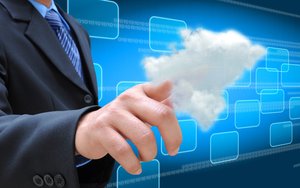 It appears that Google and Microsoft will rely heavily on revenue from their respective cloud businesses to show growth and offset other businesses, but both hit a slight pothole in the first quarter of 2016 that could make for a bumpy ride.

Microsoft Thursday reported its cloud revenue is on a run rate of more $10 billion, putting it on track to hit its promised $20 billion run-rate by 2018 if customers, including advertisers and agencies, keep spending the same amount.

The intelligent cloud unit at Microsoft, which incorporates Azure public cloud, saw a 3.3% rise in sales to $6.1 billion, but profit for the unit fell about 14% to $2.19 billion for the quarter. The good news points to sales of server products and cloud services, which rose on average of about 5%.

Cloud revenue for Microsoft should also come from voice services and bots, such as the developer network it will attempt to build out. In March, Microsoft said it would package Cortana's smarts with Bing's technology to create a developer framework for chat bots.

It also introduced a framework to help developers build their own chat bot for everything from Skype to Web sites to enterprise software applications that help plan travel — all living in the cloud.

In addition to relying on search advertising for revenue grow, it appears from Google's first-quarter 2016 revenue number that it has big plans to make a big play for cloud services. Google reported that "other revenue" rose 24% to $2.1 billion year-over-year and down 1% sequentially. The YoY performance was driven by Google Play as well growth in cloud and apps.

The company plans to bring its machine learning APIs through the Google Cloud Platform to its enterprise customers, which Sundar Pichai, Google CEO, said during the earnings call will become a "huge source of differentiation" for the company.

One big concern for analysts may become a hindrance for advertisers. Raymond James analysts Aaron Kessler and Justin Patterson wrote in a research note published Friday that "commentary on the call noted not every cloud region would require a Google data center, implying the company won't perpetually be spending large amounts to grow in cloud." Not having a data center close to high cloud traffic areas could slow bandwidth speeds.

Industry insiders and analysts, in general, are bullish on Google's cloud services in part because the VMware founder Dianne Green joined Google to lead the cloud business.

Trip Chowdhry, managing director at Global Equities Research, believes investors have put too much credence on Diane Green's cloud abilities. He calls Green "another Tony Fadell in the making, highly overrated by investors, but whose true abilities are much shallow."