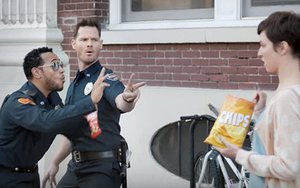 These days, The Hershey Company’s motto seems to be “Candy is dandy, but why stop there?”

In addition to a stream of new candy formats and varieties, Hershey has gotten into the booming snacks business.

The last few years have seen the introduction of Hershey and Reese’s spreads, Hershey’s Spreads Snacksters Graham Dippers and Brookside Fruit & Nut Bars, as well as the acquisition of the Krave jerky brand. The company will soon start a regional launch of SoFit, a brand that will offer snack squares and fruit and protein squeezes, among other products.

Hershey’s snack strategy calls for covering the entire spectrum, from candy and sweets on one end to protein-focused offerings on the other. The new snack mixes – which are simultaneously salty, sweet and crunchy – occupy a middle ground, which Hershey has dubbed “snackfection.”

The advertising campaign’s primary target audience is adults 18 to 34 (skewed to males) who are light to medium users of existing Hershey and Reese’s products, or heavy snack users, according to a Hershey representative. The targeted consumers are “grazers” who eat mini-meals and snacks throughout the day, tend to have very active social lives, and believe they can eat whatever they want without worrying about their weight.

The campaign features “The Snack Patrol.” That team consists of two human officers named “Nuts” and “Chocolate” and a canine officer named “Pretzel.” Their mission: “saving the world from every bland snack ever created” (meaning “one dimensional” snacks that are just sweet or just salty) by replacing the mundane snacks with the new Hershey’s and Reese’s snack mixes.

Initial TV spots include “Whoa,” in which the team talks down a young woman about to eat a bag of boring chips, and a “montage” version (below). At least one additional spot is expected to debut in the second half of the year.

A social media campaign with its own Twitter channel, @SnackPatrol, launched in mid April, and a digital advertising campaign using extensions of the TV creative launched in tandem with the television ads this week.