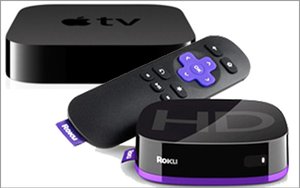 New research shows that connected TV devices are on the rise -- and now represent greater numbers than pay TV set-top boxes in the U.S.

Across all U.S. households, there are 2.1 connected TV devices per household, with 1.8 pay-TV set-top boxes per household.
Nielsen says there are 116.4 million TV homes, with other research showing a total of 96.6 million pay TV homes.

Leichtman's findings are based on a survey of 1,206 TV households throughout the U.S., coming from its 13th annual study of U.S. TV usage.