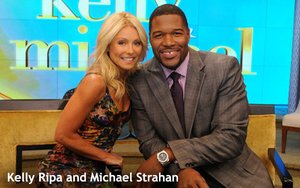 We now have a good, old-fashioned TV talent drama on our hands, thanks to ABC.

Notice that I wrote “TV talent drama” in that lead sentence. The implosion at ABC’s “Live! With Kelly and Michael” last week is the kind of thing you get only on TV. I’ve never heard of anything like it happening on the Internet, have you?

For the better part of a week, the debate has raged: Should ABC brass have kept Kelly Ripa in the loop as they wooed Michael Strahan to move from Ripa’s talk show to “Good Morning America”?

Was Kelly justified in feeling blindsided and then (reportedly) taking a sudden sick-out from the show? Is ABC nervous about her return, scheduled for Tuesday morning (April 26), and what she may say when she’s on live TV with Strahan?

On this last question: Yes, ABC might be nervous, but at the same time excited about the potential for a larger-than-normal audience for the show. One report last week suggested that ABC was keeping Kelly away from “Live!” and not the other way around because of fear she would throw some kind of a fit on TV. That seems like a reaction from some bygone era, though. Today, celebrities on TV are always throwing fits. It’s called reality television. ABC should be gleeful about all the attention suddenly being paid to “Live!”

It is true that there is great potential here for icy temperatures to settle into this morning show that’s always supposed to be sunny and warm. I read in one account that Strahan is supposed to stay with “Live!” for another four months. How exactly is this supposed to work?

The big variable here is Kelly herself. Based on her long career in the public eye so far, we have no real reason to believe she’ll be anything but professional when she reappears on the show on Tuesday. But it’s also true that the kind of show she does -- in which two co-hosts are required to at least seem like they enjoy a genuine rapport -- works best when there is at least some superficial warmth between the two principals.

In other words, the kind of superficiality required by TV can be partially faked, but not completely. The hope here is that Kelly has prepared herself to come on the show and address the “GMA” issue head-on with Strahan. Perhaps they can deal with it and then move on for the period of time they have left together.

One question many people often have when these talent dramas erupt is this: How can someone like Kelly Ripa complain or be miffed about anything when she makes so many millions of dollars every year and has what to most of us seems like a dream job?

And there’s something to this. Jay Leno was always one guy who would evade questions from interviewers about how he felt about being replaced by Jimmy Fallon or, before that, Conan O’Brien. In his public statements, Jay would always say that the general public -- many of whom live paycheck to paycheck -- really didn’t want to hear about rich entertainers battling over money. How Jay may have really felt, he kept to himself.

Having said that, when Ripa heard the news that Strahan was being offered a starring role on “GMA” -- which is a much higher-rated show than “Live!” -- she must have wondered: What about me?

She’s been with “Live!” for 15 years, and after all that time, ABC hasn’t come knocking at her dressing room door with an opportunity to move up to “GMA.” And yet, Strahan gets called up after four years partnered with her. Perhaps Kelly is starting to think about her future, since ABC doesn’t seem to have bigger plans for her.

In addition, her show might even be under threat, with some stories last week indicating that ABC News is interested in grabbing the 9-10 a.m. time period for a third hour of “GMA.” That would mean moving “Live!” heaven knows where.

Was ABC brass obligated to let Kelly in on their plans for Strahan? One friend of mine insists that they were, and that they mishandled her. He’s not wrong, but my own opinion is that Kelly is an employee. And unless her contract requires that the company make its plans known to her when they concern her show, then she shouldn’t expect them to do so.