Non-Human Traffic Is Down, Viewability Is Up In Q1 2016 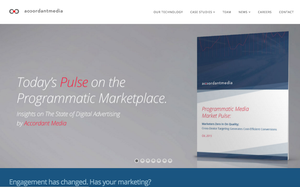 Arthur Muldoon, co-founder and CEO of Accordant Media, said there is more confidence around viewability.

Why should marketers feel more self-assured about digital ad viewing? Empowerment through data. Ben Diesbach, senior director-analytics and insights, Accordant, said marketers are now starting to understand how to take traffic from measurement solutions and make it actionable -- thereby getting a better hold on how to optimize data and leverage it in a scalable way.

"I think we expect people will recognize viewability is part of a metric that determines price, but it’s not the only one," Muldoon said. There’s value at different levels of viewability in the media-buying marketplace, he added. If you can buy 80% in-view and it costs you $100 or 40% in-view for $30, there's a higher return on the 40% in-view.

"There’s so much understandably knee-jerk attention to wanting the highest percent of viewability, but as you untangle that a little bit, the idea of a viewable CPM is a more sensible approach in our mind," Muldoon added.

In addition, the report found media auction volume jumped 217% year-over-year in the first-quarter 2016. Muldoon said this finding is a testament to the strength of the programmatic market and the migration of publishers' inventory to exchange-traded inventory.

North American exchange-traded inventory came up by 165% year-over-year and 34% in first quarter. Diesbach said people are more prominently using nontraditional means of transacting media, and getting a clearer view on how media is working for them through media measurement and validation.

-- Smartphones accounted for 71% of all mobile programmatic transactions in the first quarter of 2016, up from 59% in Q4 2015. Diesbach said people use smartphones throughout the day, so there's more opportunity to hit people on those devices.

-- Accordant Media found a 19% higher conversion rate when multiple devices are used, and 26% additional conversions occur out-of-app among users who start signing up in-app. Muldoon said there’s a lot of attention to in-app inventory, but it shouldn’t end there -- once you’ve started to cultivate an association within an app, it makes a lot of sense to follow consumers across desktop and mobile.

-- The U.K. accounted for roughly 14% of the EMEA programmatic ecosystem in Q1, and France displaced Turkey as the No. 2 market in the region.

programmatic, real-time, real-time web
1 comment about "Non-Human Traffic Is Down, Viewability Is Up In Q1 2016".
Check to receive email when comments are posted.
Next story loading