From Spots & Dots To Bots: How Silicon Valley Is Taking The Friction Out Of Madison Avenue

Bots, AI and augmented reality took center stage during one of the best one-day immersions into how startup infused technologies are transforming the relationship between consumers and brands from intrusive advertising interruptions to welcome “conversational marketing” experiences.

The showcase, the ninth edition of The Media Kitchen’s annual Digital Media Venture Capital Conference in New York, may have focused on bright shiny technology solutions, but it was mainly about understanding the friction that exists between consumers and brands, and figuring out how to remove it.

Describing the current advertising marketplace as a “house of cards” ready to collapse, TMK President Barry Lowenthal kicked things off by recapping the rapid evolution of the ad marketplace from captive TV consumers and newspaper and magazine readers to one of increasing consumer control and options.

The irony, he said, was the more consumers have adopted technology as a means of removing friction from their media experiences, the more the ad industry has created new forms of friction, leading to what is essentially an arms race in which ad blockers are the current battleground. Instead of circumventing consumer control, Lowenthal advocated leaning into it and said the ad industry has to design better, more frictionless user experiences that are “seamless, fast and useful.”

He said that kind of experience design explains the success of Netflix vs. linear TV -- and, TMK Chief Digital Media Officer Josh Engroff added, why two companies -- Google and Facebook -- currently account for 40% of all digital ad budgets.

But Engroff said the next wave won’t be dominated by search or even “social” platforms so much as it will be by “messaging” applications such as WhatsApp and WeChat, which currently dominate the peer-to-peer media marketplace by a wide margin. Citing data from BI Intelligence, Engroff showed that the Big 4 messaging apps have already overtaken the Big 4 social networks in total users and are growing fast.

He noted that messaging has been one of the primary focuses of Facebook ever since it acquired WhatsApp and that it has been retooling the Facebook Messenger app in order to create a more frictionless experience for consumers and brands. During Facebook’s recent F8 developers conference, the integration of intelligent bots -- software that can think and act on behalf of people -- into messaging took center stage as the next battleground for marketing.

The bots, AI and a ubiquitous messaging marketplace, he said, fall under the broader banner of “conversational marketing,” which itself is intended to create a more seamless and frictionless form of marketing. Have a conversation about ordering flowers for your mother on Mother’s Day and Facebook’s messaging bot will contact FTD for you automatically, was one example cited.

“Whenever someone enters an address. You can tap on it and a number of options show up, including booking a ride to that destination,” he said. “The Uber account within Facebook will actually give you a receipt and tell you when the driver is there. All the things that had taken place in the app, can now happen in Facebook Messenger itself.”

If 2016 is the “year of chatbots,” Engroff said, the week following Facebook F8 and TMK’s event on April 14 was “the week of bots.”

“We’re going to see a lot of talk about integrating with messaging,” he predicted, adding: “Get your bot or integration integrated into one of the giant messaging platforms.”

Much of the day that followed focused on those very same themes, including an insightful presentation by Facebook Vice President Product, Ads & Pages Rob Goldman, who showed how the real power of the social network was its ability to amass its users unique identities and to build a suite of products enabling brands to target them -- initially in-network and via mobile, and ultimately out-of-network via ad network affiliates.

The real breakthrough, he said, was when Facebook introduced its “Custom Audiences” platform, which effectively enables brands to target Facebook user IDs based on the brand’s own first-party or any third-party data.

“A lot of people were betting against it,” Goldman said of an internal Facebook debate before Custom Audiences was introduced, adding: “It turns out that advertiser’s data is more valuable than Facebook’s data.”

He called Facebook’s ability to identify and track its users and to associate it with brands’ targets via Custom Audiences a “unique differentiator” for Facebook, adding: “Really, nobody can compete with it.”

Goldman demonstrated an example of Facebook “auction” utilizing Custom Audiences for three different campaigns -- one for an expensive app install, one for an even more expensive offsite conversion, and one for a relatively inexpensive “link click” campaign -- and showed how the app install campaign won, despite having the highest CPM ($48).

He said the auction was powered by “machine learning” designed to optimize campaign results.

“The users that have the highest likelihood will let you win with the lowest bid,” he said, adding that the system only works because of its ability to attribute the brand’s targets to the Facebook user’s IDs.

“You’ve got the identity,” he said, describing it as a “special super power in measurement,” concluding, “Once you can measure something, you can optimize it. That’s it.”

Goldman did not stray into the next generation of conversational marketing -- the role that bots, AI and augmented realities will play at Facebook or the rest of the marketplace -- but other presenters at the TMK conference made the case that we’re on the cusp of some fundamental, and frictionless, changes in the way consumers and brands connect.

“In some ways, [virtual reality and augmented reality] are the unknown that we’re just beginning to see,” TMK’s Engroff said at the conclusion of the conference. 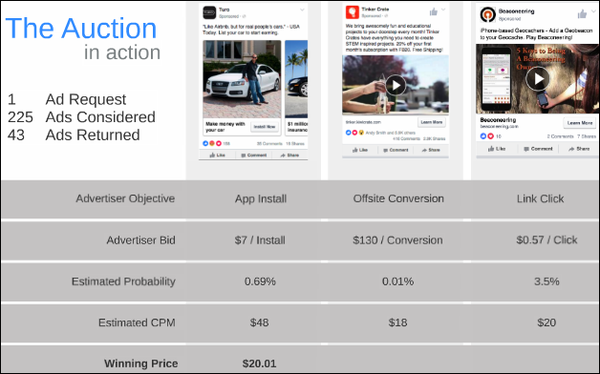