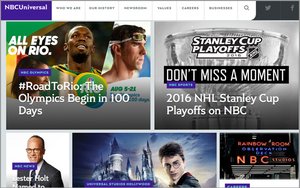 At the same time, Comcast looks to expand its content with a possible $3 billion deal for movie and TV studio DreamWorks Animation, according to a report in The Wall Street Journal.

NBCUniversal witnessed revenue gain of 3.9% to $6.9 billion. Its cable networks were the biggest reason -- up 4% to $2.5 million, due to higher advertising and distribution revenue.

Broadcast TV operations were down 7.3% to $2.1 billion due to unfavorable comparisons to a year ago in the first quarter when NBC aired the Super Bowl. NBCUniversal says excluding the Super Bowl results, core advertising revenue grew 9.6%.

Filmed Entertainment revenue sank 4.3% to $1.38 million, due to unfavorable comparisons to the first quarter of 2015 when Universal Studios had big results from the theatrical release “Fifty Shades of Grey.” Home entertainment revenues sank 24.4%.

Theme park revenues climbed 57.5% to $1.0 billion from stable attendance and higher consumer spending at the parks.