Outdoor Channel Seeks To Broaden Its Appeal This Upfront Season 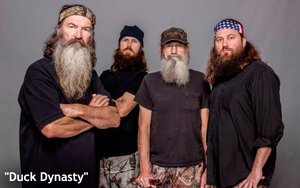 Outdoor Channel is hoping to broaden its appeal among both viewers and advertisers this upfront season with programming adjustments aimed at emphasizing an outdoor lifestyle that doesn’t necessarily involve guns and hunting.

The centerpiece of this effort is “Duck Dynasty.” Outdoor Channel obtained the rights to the first six seasons of the hit A&E show and has begun airing the shows on Monday nights.

Obtaining this show was somewhat of a coup for Outdoor Channel.

“Duck Dynasty” has been one of the highest-rated series in the history of basic cable. Outdoor was not the only network that wanted the rerun rights, said Jason Brist, executive vice president of ad sales at Outdoor Sportsman Group.

The purchase of the “Duck Dynasty” syndication rights “elevates and legitimizes us in competition with other major networks that are out there looking for other syndicated properties like this,” Brist said.

“Duck Dynasty” is the “anchor” of a Monday night lineup that represents a new direction for Outdoor Channel, Brist said. “We’ve created a Monday night bloc of lifestyle programming that we think is going to be a safe haven for national advertisers and brands to get into the outdoors, but without some of the things that maybe scare them off -- guns and hunting and so forth,” Brist said.

Joining “Duck Dynasty” on the Monday schedule are two new shows and one returning series. The new ones are “Alaska’s Wild Gourmet,” about a family of caterers who prepare gourmet meals in the wilds of Alaska for hunting and camping groups; and “Carter’s W.A.R.,” about a swashbuckling wildlife conservationist named Ivan Carter and his wildlife advocacy efforts (W.A.R. stands for wild animal response).

The returning series is “The Gunfather,” about a family of Italian-Americans from Long Island who have moved to Montana to run a family-owned gun shop. Yes, the show is about guns, but it’s more about the family-business dynamic than about firearms, Brist said.

He explained that Outdoor Channel, which is now available in about 40 million U.S. TV homes, hopes to draw more viewers among not just people who participate in outdoor sports, but “armchair adventurers” interested in certain aspects of the outdoor lifestyle such as conservation.

“Outdoor Channel will always be rooted in the outdoors,” he said, “but pushing into other [areas of] adventure. The idea is to really grow to try and address the programming interests for what we have found in our research to be 134 million outdoor enthusiasts and armchair adventurers.”

For the second year in a row, Outdoor Sportsman Group held an informal upfront event Wednesday evening at a Texas barbecue restaurant in Manhattan. The company’s pitch was informal too. “Thanks so much for considering Outdoor Sportsman Group, putting us in your buys [and], thinking about where we can help your clients, not just in television but also in print and in digital,” Brist told the group of ad agency reps at the informal gathering.

“This summer, our mobile app will be launching as well,” he said. “There are a lot of ways to think about Outdoor Sportsman Group.”