Ad spending on original digital -- both desktop and mobile -- programming has more than doubled since 2014, and those budgets have come primarily out of television, according to findings of a survey of advertiser and agency executives released this morning by the Interactive Advertising Bureau (IAB).

Results of the survey, which suggest a significant shift is taking place in the TV/video advertising marketplace, not surprisingly were released this morning by the IAB on the first day of its week-long Digital Content NewFronts in New York City.

The survey, which was conducted by Advertiser Perceptions, polled 360 ad executives between March 14 and 25, and found that their average video ad spending has nearly doubled over the past three years, but their investments in the kind of “original” digital video programming being showcased at the NewFronts rose 114% in two years.

The NewFronts, which were originally conceived by Publicis’ Digitas unit to foster the same kind of original content development that the network TV upfronts historically played, were folded into an industry-wide initiative overseen by the IAB beginning in 2012. 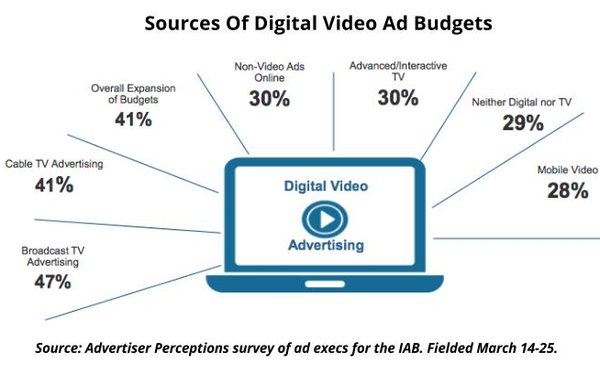