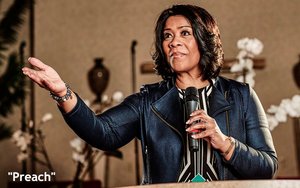 Well, not in the sense that the medium has suddenly renounced all sinning. That would be too much to ask. But yes -- in the sense that TV has discovered that charismatic ministers can make for compelling reality TV characters.

The impetus for this TV Blog, which is about to identify yet another programming trend in Television Land, is the announcement earlier this week that the co-creator and former executive producer of “The View,” Bill Geddie, is spearheading another television panel show, this time featuring a foursome of ministers.

This daily show, titled “The Preachers,” is slated for a three-week test run this summer on the TV stations owned by Fox Television. Warner Bros. Domestic Television Distribution, which announced the show on Monday, is the syndicator that is hoping the show will pass this test with flying colors so it can then be launched into national syndication.

Tests such as this -- conducted by a prominent station group -- have become de rigueur in the TV syndication business lately. For example, a test run last summer on the stations owned by Tegna (formerly the Gannett group) for a talk show hosted by another preacher -- Dallas minister T.D. Jakes --was successful enough for Tegna to go ahead with the show. The company cleared it on its own stations and is seeking to distribute it to others.

In fact, Jakes is a big part of TV’s preacher trend. He has been flirting with the idea of hosting a national talk show for a number of years, but this year, the stars seem to be aligning for him. Maybe that’s because TV is suddenly awash in preacher shows.

Combining all of these shows, you now have a reality-TV preacher population on TV of just over 35. An exact figure is hard to ascertain because the information on Lifetime’s press site for “Preachers’ Daughters” lists nine daughters, but doesn’t specify if they’re from nine preachers. This is what I mean when I tell people that TV column writing is never an exact science.

In the case of Bill Geddie’s “Preachers” show and T.D. Jakes’ upcoming talk show (premiering in September), it’s the preachers’ ability to counsel and inspire that has TV executives looking to this group for an uplift in the ratings. As Jakes himself told me last winter, he’s been counseling people in trouble for decades. For him, morphing into a minister version of Dr. Phil on TV is no big stretch.

It should go without saying that ministers have long been part of the TV landscape, but traditionally seen almost exclusively on weekends in Sunday-service environments. What’s new now is that they’ve broken out into cable prime time and they’re soon to become a part of daytime on broadcast stations too.

Where daytime syndication is concerned -- with its court shows, “Maury Povich” paternity tests and “Jerry Springer” brawls – maybe the new wave of TV preachers can bring some order to the chaos.