Videology Confirms Layoffs Of 8% Of Its Workforce, Shifts Focus To Larger Deals And Linear TV 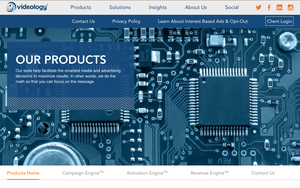 Videology on Wednesday confirmed that it laid off about 32 employees--roughly 8% of its workforce--in January, and  plans to shift its focus to larger deals and linear TV work. The news was first reported by AdExchanger.

The layoffs were in sales and client services, Videology CEO Scott Ferber confirmed.

"Out of respect for our employees, I’d rather not discuss exact numbers. I can say that we’ve consistently had between 375 and 400 employees for the last several years. Our reorganization four months ago in January resulted in about 8% reduction of our staff at the time— primarily in the commercial organization," Ferber told Real-Time Daily via email.

Since the reduction in January, Videology has brought on 25 employees to fill different roles, Ferber confirmed. The employees have a variety of responsibilities with expertise in both TV and technology.

The company most recently made headlines with Adobe, Sky and AT&T deals, something Ferber said will continue in the future. Videology will focus on larger deals with enterprise clients that comprise the majority of its base both on the demand and supply sides. "In fact, a growing percentage of our current customers are on the supply side of the industry, compared to a very small percentage two years ago," Ferber said.

Regarding future plans, Ferber told Real-Time Daily: "It’s important that companies in this space understand the evolution of their customers, and as such, evolve their offerings to meet those needs. Things move very quickly and client needs consistently change. ...This is an exciting time to be in advertising. TV and digital video are actually converging--something we’ve been pushing for more nearly a decade now."

In December, Ferber told Real-Time Daily that this year would be a big year for linear TV demand, citing the U.S. presidential election and the Rio Olympics. He also said that next year will be the year that big dollars begin to flow to data-fueled, audience-based, automated TV advertising. Read more here.