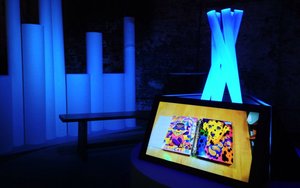 A presentation by CNN president Jeff Zucker included an intro video of a Boy Scout comparing his toolkit to the tools storytellers can use to take their brands "beyond the wilderness of ad blockers."

Zucker said: "Today is not about CNN, and it's not about news or headlines. It's about something different and truly remarkable. It's about the first company we've launched in 35 years that doesn't boast those three little letters the world knows so well."

Great Big Story currently earns more than 40 million monthly video views across platforms, and so far, it's worked with HP and GE. It has plans to launch on Snapchat, Apple News, Roku, Facebook Messenger and others. Some say it's CNN's answer to BuzzFeed's viral, youth-focused content.

"The audience today is intelligent enough to know when they're being sold to," Sands said. The company offers brands the option of creating original stories or distributing existing brand stories. Great Big Story is funded by CNN and Turner, but it's editorially independent, Sands said.

Zucker mentioned the network's average viewer age: 27. Is this another Millennial-focused network? No, Sands said. GBS is for anyone who's intellectually curious. Viewers tend to be successful urban dwellers with influence over their peer group and friends.

Announcements included the shows "A Year in Space"; "Dear Basketball," an animated series based on Kobe Bryant's life for Sports Illustrated; a Jenna Bush series with Southern Living called "Southern in the City"; Morgan Spurlock's "EW Pop Docs"; and a virtual reality series from Life.

Time also announced the launch of a People and Entertainment Weekly video network defined by long-form programming, with a built-in audience of 100 million people who read the publications.

Time Inc. digital president Jen Wong said: "Our brands are trusted and they're certainly known to all."

On the topic of the company's acquisition of Viant, Wong said Time Inc can offer advanced data, targeting and measurement, as well as smart TV and mobile insights.

"We know what works," Wong said. "Because of this massive content engine, working with us is easy -- turnkey."