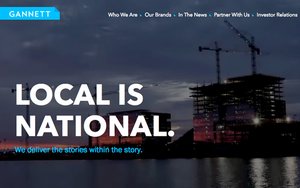 Gannett today released a statement in response to Tribune Publishing Company’s rejection of Gannett’s acquisition offer, reaffirming their commitment to negotiating a deal with the company.

John Jeffry Louis, chairman of the Gannett Board of Directors, stated that Tribune’s rejection confirms their board “never intended to engage with us.”

He continued: “It is unfortunate that Tribune’s Board would deny their shareholders this compelling, immediate and certain cash value by rejecting our offer without making a counterproposal or otherwise negotiating or providing any constructive feedback.”

As Publishers Daily reported last week, Gannett made public its bid to acquire Tribune for $815 million. The announcement has been followed by a back-and-forth between Tribune Publishing CEO Justin Dearborn and Gannett CEO Robert Dickey, each claiming the other party hasn't been willing to negotiate.

“If Tribune’s Board and advisors view Gannett’s $12.25 per share proposal to be undervalued, the Tribune Board should release its analysis to Tribune shareholders to justify its issuance of shares to Michael Ferro at $8.50 per share in February 2016,” Gannett’s statement continued.

According to CNBC, Tribune told Gannett's management in a letter on Wednesday that its board had reviewed the bid and decided that "the price reflected in the proposal understates the company's true value and is not in the best interests of our shareholders."

In the statement, Tribune said Gannett’s offer does not warrant "further discussion.”

Tribune disclosed its letter just as it released weak first-quarter earnings with a net loss of $6.46 million, down from last year’s profit of $2.52 million, with revenues flat at $398.2 million.

But Dearborn, who has been CEO for just three months, says the company is “at the very early stages of executing our clear plan to transform Tribune Publishing by increasing monetization of our important brands, capitalizing on the global potential of the LA Times, and significantly accelerating our conversion of content to revenue through an enhanced digital strategy. As we execute our plan, we are confident in our ability to deliver value for our shareholders.”

Gannett can now choose to walk away or try to persuade Tribune shareholders to convince management to reconsider — and it looks like the company is choosing the latter.

Jeffry Louis added in the statement that Gannett’s board and management team “are ready to negotiate a transaction with Tribune and urged shareholders to vote “withhold” in the election.

On Monday, Gannett announced a campaign to urge Tribune Publishing shareholders to withhold their votes for board member nominees in an election held June 2.