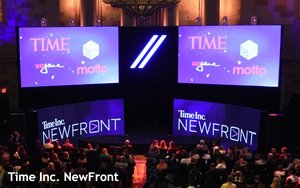 With its new OTT network plus a number of other video initiatives it announced, Time Inc. joins other legacy print media companies, such as The New York Times Co. earlier this week, in staking its future on an expansion of its video portfolio.

The People/Entertainment Weekly Network (the OTT service) will be free to users. Content will be drawn from the resources of the two magazines.

Another service, a mobile-first platform emphasizing content for millennials and teens about young celebrities – many of them making their names on social media – will debut later this year. Called “Meet the New Famous,” it will “cover the lives and work of the popular digital talents of YouTube, Snapchat, Vine, Instagram and more,” the company said.

“Together, these programming and technology initiatives underscore Time Inc.’s strategy to create premium video content in all formats to be distributed across traditional channels as well as new platforms that are redefining media consumption,” said the company’s positioning statement in its announcement Thursday morning.

“This will present a significant opportunity for our advertising partners to work with us to leverage our scale and these platforms to connect with our engaged audiences,” said Rich Battista, president of Time Inc.’s entertainment and sports group and video.

Time announced a number of new original programs to go along with its new platforms, including:

“Dear Basketball,” a joint venture of Sports Illustrated and Kobe Bryant that will bring Bryant’s animated “tribute” to basketball – called “Dear Basketball” – to multiple Time Inc. platforms. Bryant produced it when he retired from the game earlier this year.

“The Jess Cagle Interview” (from People and Entertainment Weekly), which will feature Cagle, the editorial director of the two magazines, conducting one-on-one interviews with movie and TV stars.

“Southern in the City” (from Southern Living magazine), in which Jenna Bush Hager will roam around New York in search of southern personalities and attractions.

“Sports Illustrated Swimsuit: Swim Unfiltered,” described by Time as a “groundbreaking series [that] will give fans personal access to top global trendsetters. … Get ready for a behind-the-scenes first-person vantage point for the parties, grueling workouts, glamorous photo shoots and moments of self-reflection and determination with the world’s most beautiful models.”