The Top 5 Takeaways From This Week's NewFronts 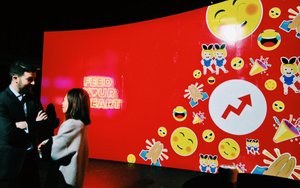 The IAB's Digital Content NewFronts have advertising folks hopping all over New York this week and next. If you made all the events, good for you. Enjoy your branded key rings, towels, koozies, paper pads and pens.

If you missed this week's flashy lineup of events, don't worry -- Real-Time Daily has you covered. Below are some highlights.

Ad-Skipping Can Be a Good Thing, Maybe

At the Digitas NewFront, Scott Donaton, chief content officer, DigitasLBi North America,  said, “The key to winning consumers is to tell a narrative worthy of their time."

Consumer empowerment has been a good thing for audiences, but not a good thing for brands, Donaton said. But maybe that’s wrong, he added -- skipping ads could be a positive statement because audiences really want to get to the experience they're looking for. And within that content, brands can educate, inspire, touch lives, win hearts and more.

“Don’t get in the way of what they want; be what they want,” Donaton said, citing a bunch of brands that sponsor content, including Taco Bell and Marriott.

Not Everyone Is Targeting the Millennial

Rob Sands, head of distribution and partnerships with CNN's Great Big Story, said the company isn't another millennial-focused network, even though its average viewers tend to be 27-year-old urban dwellers. GBS is for anyone who's intellectually curious, Sands said.

VR Has Arrived, and Everyone Is Trying It Out

The New York Times announced a bunch of virtual reality projects, including a space show called "Seeking Pluto’s Frigid Heart," a program on the upcoming Olympics, a series of short scenes that put you in a relaxing environment, a show set in Iraq and one with a world-famous chef.

Digitas also touched on VR. AOL's David Shing talked about the future of virtual reality with June Cohen of Vrse and Eugene Wei of Oculus.

Virtual reality is expensive, Shing said, so what are the metrics for showing ROI on VR? Cohen said that now is the moment for visionary brands to make an impact. When people try VR for the first time now, they'll have a deep response that can be associated with the first brand to show them that experience.

Refinery29, AOL/Verizon and Time Inc all made announcements about virtual reality projects this week.

BuzzFeed's Tasty Network Is For Real

With more Facebook likes than Justin Timberlake, BuzzFeed's Tasty network has been busily pumping out videos since its launch last August. It's getting billions of views weekly and expanding to the U.K., Brazil, France, Germany and Latin America. Two subsequent brands have also launched: Tasty Happy Hour and Tasty Junior.

Social Networks Get Mentions at NewFronts (Without Being There)

Sans actual presentations, Facebook and Snapchat were buzzed-about this week. Just about every presentation included Snapchat and Facebook data, as well as plans to use either platform.

BuzzFeed announced it got 800,000 concurrent viewers for a watermelon explosion experiment its staff streamed on Facebook Live; Hearst is planning a Facebook Live video series; and some AOL Build live events will be streamed via Facebook Live. Likewise, Snapchat got shoutouts from BuzzFeed (a fifth of its views come from its Snapchat Discover channel); Popsugar; and Ellen DeGeneres' new network.