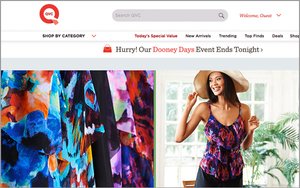 While the number of individual units sold gained 7%, the average selling price per unit declined 3% to $60.03. Liberty says the U.S. had growth in apparel, accessories and home categories, offset by declines in jewelry and electronics.

QVC's international revenue inched up 2% to $606 million, with its revenue performance seeing the impact of unfavorable exchange rate fluctuations. The number of individual units sold gain 3% in the quarter.

In October 2015, Liberty Interactive acquired e-commerce company Zulily. The company witness net revenue growth to $355 million from $307 million. Liberty said its mobile orders improved 62% of total orders placed in the quarter, compared to 55% in the year prior. It expanded its operation loss to $43 million from $4 million in the same period a year ago.

Last year, Liberty Interactive announced a plan to spin off its other e-commerce businesses in its Liberty Ventures group to be called CommerceHub and Liberty Expedia Holdings. For the first quarter, the Ventures group had revenues of $276 million. It posted an operating loss of $1 million for the period.