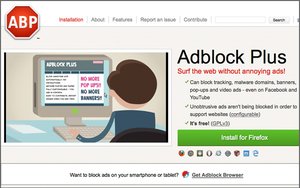 Ad-blocking tool Adblock Plus announced it has surpassed 100 million active installations. (It’s calling them users, but it counts downloads on multiple devices as different users.) The company said it had surpassed 500 million downloads with 50 million active users at the beginning of the year, meaning that the active user base has likely doubled since that time.

“These are our latest numbers, which we’ve been working for months on getting more accurate without breaking our strict privacy policy,” stated Adblock Plus head of operations Ben Williams. “Harder than it sounds… Happily, we’ve got some stupid smart data scientists who’ve figured out a way to get an accurate estimation.”

Most advertisers will tell you that it’s the ads that intrude on and disrupt user experience, driving users to ad blockers.

“We’re in this mess because the IAB has failed to create an advertising ecosystem that is sustainable and healthy,” Till Faida, CEO and co-Founder of Eyeo, Adblock Plus’s parent company, said onstage at Tech Crunch’s Disrupt NY 2016 conference.

Adblock Plus runs a white-list program called Acceptable Ads that allows certain advertisers through its screen. The company gets a cut of publisher’s revenues through that program.

Ad blocking has been a buzzworthy topic of conversation among those in the ad-tech business since last summer, when Apple’s announcement that it was including ad-blocker extensions on Safari for iPhones.

Some have said that the threat to the ad business is negligible; others claim users are voting with their dollars and that advertisers have to take their feelings into consideration as they consider an update to the ecosystem.