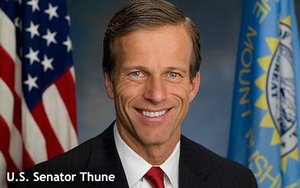 Facebook may mislead the public with its Trending Topics section, which allegedly excluded news that would interest conservatives, the chairman of the Senate Commerce Committee suggested Tuesday.

"If Facebook presents its Trending Topics section as the result of a neutral, objective algorithm, but it is in fact subjective and filtered to support or suppress particular political viewpoints, Facebook's assertion that it maintains a 'platform for people and perspectives from across the political spectrum' misleads the public," Sen. John Thune (R-South Dakota) wrote in a letter to Facebook CEO Mark Zuckerberg.

Thune's letter comes one day after Gizmodo reported on a former "news curator's" allegations that Facebook suppressed stories about conservative topics -- including pieces about Mitt Romney and Rand Paul. Facebook also allegedly inserted other stories -- including ones related to the "Black Lives Matter" campaign -- into the trending section, even if users weren't discussing them.

"If true, these allegations compromise Facebook's 'open culture' and mission 'to make the world more open and connected,'" Thune writes.

Facebook's Tom Stocky, vice president of search, wrote on Monday that the company has "found no evidence that the anonymous allegations are true.

He added that the company's guidelines don't allow suppression of political viewpoints, or "the prioritization of one viewpoint over another or one news outlet over another."

The company tells users that trending topics are "based on a number of factors including engagement, timeliness, Pages you've liked and your location."

Thune is asking Facebook to answer a host of questions, including how it plans to investigate claims in the Gizmodo article. Thune also has asked Facebook to provide a list of "all news stories removed from or injected into" the trending section since January 2014.

Santa Clara University law professor Eric Goldman, who has long argued that search engines and other online platforms are not "neutral" when they display content, says the allegations nonetheless could prove problematic for Facebook. "It would be troubling if Facebook was deliberately and manually 'tipping the scale' towards one ideology over others without making that bias clear," he says in an email to MediaPost.

He adds that Facebook's trustworthiness will suffer a hit if people believe the company is trying to spin users. "I expect Facebook will bend over backwards to prove that it isn't," he says.