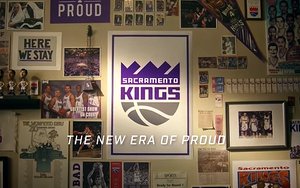 The NBA’s Sacramento Kings are rebranding the franchise, including the launch of a new logo.

An accompanying campaign was created by San Francisco-based ad agency Camp + King and features a 60-second video that unveils the logo. It was shown during an invite-only event at the team’s future downtown home, Golden 1 Center. The agency won the rebranding assignment in January after a search.

The new logo is rendered in royal purple and granite and sports a reshaped crown, a refined basketball and a new typeface that puts Sacramento front and center. It builds upon the design created for the Kings when they moved to Sacramento in 1985.

The creative also introduces a new theme line: “The New Era of Proud.” In the 60-second spot, a lifelong fan is shown in his living room before an entire wall he has devoted to the Kings. He rearranges news clippings, photos and other parts of the team’s history in Sacramento. The audio narrative is a compilation of news highlights, major victories, player interviews, and reports on the team’s 2013 decision to remain in Sacramento.

The spot is running on local TV in Sacramento and will be featured in social media activation on the Kings’ various channels. It’s also on a microsite that Camp + King helped to develop, which showcases the new logo and defines the narrative behind the updated look and team merchandise.

Sacramento is in the midst of a transformation, much like when the team first moved to the city in 1985, says Kings President and Chief Operating Officer Chris Granger.

“As was the case then, the ambition, the community spirit, and pride of our city is at an all-time high,” Granger tells Marketing Daily. “This rebrand, which is reminiscent of our original look, reflects the civic pride, and serves as a reminder that when you cheer for the Kings, you root for all of Sacramento.”

The logo was developed with an in-house team working with RARE Design after surveying 20,000 local residents to find out how they feel about the arena project and the team, he says.

“It was a true team effort,” Granger says. “In-house designers, players, executives, outside consultants, and our apparel partners all weighed in and refined the direction from our fans.”

The launch campaign included an opportunity for the team’s diehard fans to receive new logo tattoos at select parlors for a limited time. Digital billboards broadcast the new marks and a graffiti artist crafted a mural showcasing the new SAC logo at the center of one of Sacramento’s busiest districts.

The campaign is aimed at current Kings fans, Granger says.

“Throughout the development process of the new visual identity, we worked to find ways to pay tribute to our fans and their unmatched pride,” Granger says. “And on our launch day, employees, players, and Kings legends set out to share the new logo across the city.”

“By the end of the day, the city was covered in purple and buzzing about our new emblem,” Granger says.