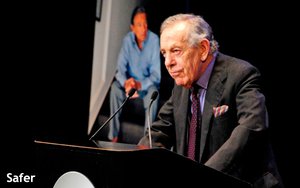 Safer, who announced earlier this week that he’s stepping away from “60 Minutes” after 46 years, is just 84. Mike Wallace was 87 when he “officially” retired from the show in 2006, although the last interview he conducted for the show -- with pitcher Roger Clemens -- was in 2008.

If I’m not mistaken, Rooney was likely the last of the former World War II correspondents at that time to still be working in the broadcasting business or possibly in the news business generally.

It’s an interesting thing about CBS: More than any other broadcast network, this company has a knack for keeping people around. For example, Bob Barker was nearly 84 when he finally relinquished his long, slender microphone as host of “The Price Is Right” in 2007. He once told me he used that style of microphone because he had to position it very close to the mouths of the show’s over-excited contestants, and if he used a mic with a big, bulbous top it would have covered half their faces.

NBC doesn’t seem to have any of these older types of personalities, unless I’m drawing a blank on someone. Don Pardo was still the announcer for “Saturday Night Live” when he died in 2014 at age 96, but he wasn’t on-camera. Does he count?

ABC doesn’t have these senior personalities either, with the exception of Barbara Walters, who still does interviews and specials. She’s 86 and very tenacious. Tell Barbara it’s time for her to hang it up? That’s probably an assignment no ABC executive who values his or her life wishes to receive.

Forty-six years on “60 Minutes” is quite a run. Only a handful of personalities in the history of broadcasting -- radio or television -- can claim that kind of longevity. There was a time, though, when it was more common, particularly in radio, where you’d have some local air personalities on the big AM stations who would stay in their positions for years and years and years. There are a handful of such people anchoring local news around the country too.

I wonder if such a phenomenon is even possible today. Communications media is changing so fast that you can hardly imagine anyone on TV or radio now who will still be at it, on the same show, 40 years from now (assuming there are still “TV” and “radio” in 2056 as they are currently constituted or understood today).

There was always something comfortable about having the old guard still on the job at “60 Minutes.” I’ve wracked my memory for a Morley Safer story, but I have none. I went back in the personal archives and can find no interviews with him either. I wonder if he picked up his own phone at the office.

That’s something I’ll always remember about Wallace and Rooney -- that they were so old-school that if you called the CBS switchboard and simply asked for either one of them, you would get connected to their offices. Then, the chances were pretty good that they would answer the phone themselves and actually agree to answer a couple of questions without regard for CBS News division p.r. protocols. Don Hewitt, the long-time executive producer of “60 Minutes,” used to do that too.

The CBS News press Web site has photos of Safer speaking at memorial services for Rooney and Wallace. The picture above is from the Wallace memorial in 2012, the year Wallace died at age 93.

That’s one way of memorializing someone -- give a eulogy. Here’s another: At a casual bar and restaurant in my New York neighborhood where Wallace liked to eat, his favorite entrée, the meatloaf, was renamed the Mike Wallace meatloaf a few years ago. It’s still on the menu.

broadcasting, news, tv
1 comment about "Reflections On Morley Safer's Retirement From '60 Minutes'".
Check to receive email when comments are posted.
Next story loading